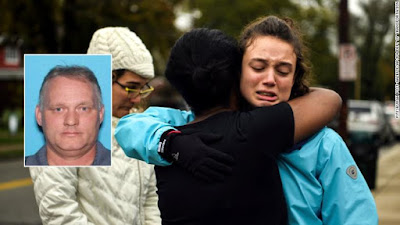 In the wake of the arrest of the MAGA Bomber a Neo-Nazi interrupted services at a synagogue in Pittsburgh and killed 11 worshipers.  Reportedly the shooter - yet another angry white male - shouted all Jews must die.  The trigger for the slaughter?  Anti-Semitic hatred, of course, but per the shooters online rants, also anger at Jewish charities aiding refugees who the shooter deemed as invaders of "his country."  One doesn't have to ponder long before realizing the shooter was perhaps emboldened by the worse immigrant/refugee hater of them all, the occupant of the White House.  Specifically, the Pittsburgh shooter blamed Jews for aiding the immigrant caravan about which Trump has been lying for days.Attempted political assassinations of individuals demonized by Trump and a mass shooting of a members of a religious minority targeted seemingly for aiding refugees - a favored target of Der Trumpenführer -all in one week.  Try as Trump and his bigotry filled supporters might to shirk any responsibility, only the delusional do not to see any correlation between violent rhetoric from the White House and the actions of those who feel their actions have been legitimized.   A piece in Forbes by a clinical psychologist lays out why Trump cannot disclaim responsibility.  Here are excerpts:

Make no mistake, President Trump is responsible for the MAGABomber. Not directly like he told him to do it. But still fully responsible. I write that knowing that doing so increases the chances that the next Trumpian stirred-up by [Trump’s] the president’s unprecedented incendiary rhetoric who happens upon my writing might try to hurt me. And I know that because that’s just how the psychology of hate works.

Trump has, intentionally or not, hit a trifecta of hate that foments terrorism, in this case domestic terrorism. At rallies and speeches his incendiary eloquence identifies opponents as enemies then motivates hatred and sanctions violence against them. Facts no longer matter. Nor do values shared with those he sees as horrible, terrible people. What matters is that it’s us versus them. And we can’t let them win. Never apologize, never back down.

The trifecta is important, central in fact. . . . when right wing apologists start defending President Trump, as they will, by pointing to sharply critical things people like Maxine Waters or Bernie Sanders may have said they will be missing the point. And if they’ve read this piece they will be willfully trying to deceive. The psychology of hate shows you need Trump’s trifecta to be responsible. So let’s look closer.

For a leader to be responsible for the terrorism he incites they first have to identify opponents and critics as an enemy, an other. They are not just reasonable adversaries, a loyal opposition. They are a hostile enemy. And President Trump amply checks this box. Whether it’s the fact-based press, oppressed people of color, “globalists” (usually an anti-semitic code word), Hilary or Democrats in general, Trump brands critics and opponents as an enemy other, not “one of us.”

Second is taking these outsiders and making them objects of hatred, people against whom rage should be directed. It’s not enough to scorn, ridicule or shame them. They deserve your rage. And first as a candidate and now as president, Trump has shown a remarkable talent for making people feel good about hating others. . . . . If you need evidence look no further than things like the naked fury directed towards the press at his rallies or the gleeful foot-stomping chants to imprison a political opponent.

Third is where most enlightened leaders stop:  sanctioning violence. After creating a sense of belonging to a special group by emotionally positioning himself as an object of identification—be like me if you also want to be a rich pussy-grabber who only wins and never loses—Trump then takes the next step to license violence. In one infamous example he fully supported a rageful supporter sucker-punching a protester. An early version as president was his tepid response to Heather Heyer’s murder by a supporter in Charlottesville in 2017. Just a few days ago was a rally where he endorsed a congressman who had attacked a reporter saying “Any guy who can do a body slam … he’s my guy.”

Like in the myth of Pandora who released evil out in the world, the fires of hate are hard to extinguish. . . . . By leading with this trifecta of hate, President Trump is responsible for the pipe bombs sent by a supporter. Yes, early reports clearly show the MAGABomber was vulnerable to these messages of hate. But if someone throws a lit match into a vat of gasoline, they should not be surprised at the resulting fire. And they should be held responsible

Posted by Michael-in-Norfolk at Saturday, October 27, 2018