Caitlyn Jenner: I Was Wrong About Trump [and the GOP] 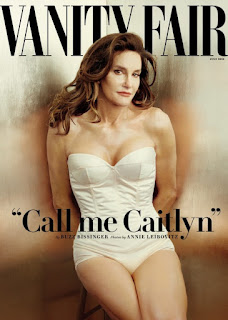 Most of the gay Republicans I know are white males with above average education and incomes who worry more about tax cuts and loss of white privilege than what happens to the fellow LGBT citizens.  They think that their skin color, education, and social connections will protect them no matter what adverse consequences befall others in the LGBT community.  Ironically, many wealthy European Jews thought the same thing as Nazism was sweeping across Europe.  Many of them ended up losing their lives in death camps or, if they were lucky, managed to flee with the clothes on their backs.  Caitlyn Jenner fits the stereotype that I describe and in 2016 she foolishly supported Trump and other Republican candidates insanely - in my view -  believing that Trump/Republicans would help transgender people and the LGBT community.  Anyone with a few years of experience in the gay activism arena could have told Jenner she was delusional.  Trump sold his soul (assuming he has one) to the Christofascists in June of 2016 and waging war on gays and transgender individuals in particular was a key part of the bargain.  As for Republicans in general, in state after state and in Congress they have blocked meaningful non-discrimination protections.  Now, in a Washington Post op-ed, Jenner admits that she was horribly wrong in believing Trump/Republicans.  Sadly, a number of local gay Republicans that I know are still drinking the Kool-Aid and refuse to see the GOP as the enemy.  Here are op-ed highlights:

These past two years under President Trump have given me the opportunity to reflect on a lot of topics that have come up in the LGBTQ community and in our nation.

[M]y outlook has changed significantly from what it was during my highly publicized and glamorized early Caitlyn days, when my life as an out trans woman was just beginning.

Since then, I have learned and continue to learn about the obstacles our community faces, the politics that surround us and the places my voice can help. I have reflected on what my unique position of privilege means and how I can best use it to make a positive difference.

Following Trump’s election as president, I saw fertile ground for change within the Republican Party on LGBTQ issues. Trump was the first Republican presidential candidate to claim to support this valuable, vulnerable community, and I was encouraged by the applause he received when he said at the Republican National Convention in July 2016 that he would stand up for the LGBTQ community. Poll after poll showed that Americans’ views on LGBTQ issues were changing for the better . . . . I was optimistic that this was how I could leverage my privilege for change.

Despite the criticism I received from segments of the LGBTQ community for engaging with this administration, I remained hopeful for positive change.

Sadly, I was wrong. The reality is that the trans community is being relentlessly attacked by [Trump] this president. The leader of our nation has shown no regard for an already marginalized and struggling community. He has ignored our humanity. He has insulted our dignity. He has made trans people into political pawns as he whips up animus against us in an attempt to energize the most right-wing segment of his party, claiming his anti-transgender policies are meant to “protect the country.” This is politics at its worst.

Believing that I could work with Trump and his administration to support our community was a mistake. The recently leaked Department of Health and Human Services memo that suggests — preposterously and unscientifically — that the government ought to link gender to one’s genitalia at birth is just one more example in a pattern of political attacks.

It’s clear these policies have come directly from Trump, and they have been sanctioned, passively or actively, by the Republicans by whose continued support he governs. My hope in him — in them — was misplaced, and I cannot support anyone who is working against our community. I do not support Trump. I must learn from my mistakes and move forward.

I am more determined than ever to find the best way to bring trans issues to the fore of our social and political conversation, domestically and abroad. I need to listen more to the members of the LGBTQ community and to learn more. I need to better use my voice, my privilege and my foundation to advocate and support our community.

I must continue to educate political and corporate leaders about the issues of homelessness, job discrimination, violence, access to health care, prejudice in housing, depression, suicide and so many other issues that disproportionately affect our long-ignored community. . . . We will not be erased.


Despite her failings as an activist, Jenner has at least admitted that she was wrong - very wrong, in fact. Would that the local gay Republicans I know would come to their senses and (i) admit they were wrong, and (ii) work to defeat Republicans on November 6, 2018.
Posted by Michael-in-Norfolk at Thursday, October 25, 2018