The Ugliness and Hatred That Trump Has Wrought 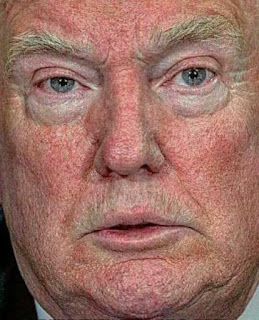 Being gay, I am used to receiving threats and harsh language.  I was forced from a former law firm for being gay and I've received death threats (all of which came from "conservative Christians"), especially for writing my personal blog.  I've also suffered harassment by the Norfolk police before the Norfolk Police Department adopted an LGBT friendly stance.  While the personal threats have lessened of late, the advent of the Trump/Pence regime has made anti-LGBT animus acceptable again.  Indeed, the rise of Trump/Pence has made hatred in general, especially against those who are "different" or "other," once more acceptable.  Fast forward to today's attempted pipe bomb terrorism effort (with five similar bombs) against prominent Democrats and such rhetoric normalizing violence certainly points to right wing extremist efforts be they the work of a single lone wolf or, worse yet, some extremist group.  The right wing media - think Rush Limbaugh, et al - is alleging that liberals sent the bombs, but I doubt that such is the case.   I may be proven wrong, but statistically, right wing elements are the most frequent to resort to violence.  Either way, Trump has created a dangerous and toxic atmosphere where such efforts have been granted permission by the White House.  A column in the Washington Post looks at the normalizing of hate and violence.  Here are highlights:


What hath Trump wrought?  Rep. Greg Gianforte (R-Mont.) last year pleaded guilty to assaulting a journalist. President Trump last week celebrated the assault.  “Any guy that can do a body slam, he’s my kind of — he’s my guy,” Trump said to cheers.  CNN’s Jim Acosta said one man at the rally then looked at him “and ran his thumb across his throat.”

Trump appropriately denounced “acts or threats of political violence of any kind.” But it’s fair to ask: If a person who assaults a journalist is Trump’s “guy,” might not some unstable person think that, by sending a pipe bomb to a news organization, he, too, is being Trump’s guy?

Nobody but the perpetrator is responsible for this attack. . . . . But one man has done the most to create this climate, whipping supporters to fear and desperation with often violent rhetoric. And only one man can take us back from the brink. Stop the mob, Mr. President.

In the closing days of the 2018 campaign, Trump has revived what worked in 2016, encouraging his mostly white and mostly male supporters to feel besieged by dark-skinned people, immigrants, women, religious minorities and, of course, the media.

Trump’s latest stump speech portrays these Democrats as violent, lawless and inhuman, responsible for “an assault” on the country, an “angry left-wing mob” on a “ruthless mission to . . . demolish and destroy,” “corrupt power-hungry globalists” who are “not caring about our country” and “want to replace freedom with socialism” and invite people into the country who “carve you up with a knife.” Democrats are “openly encouraging millions of illegal aliens to . . . overwhelm our nation” and have “launched an assault on the sovereignty of our country . . . and the safety of every single American.”
Is it any wonder people might feel desperate?

[O]ne public figure’s [i.e., Trump’s] rhetoric has been more violent than all others, and he has the biggest megaphone. He encouraged supporters to “knock the crap out of” protesters and offered to pay attackers’ legal bills. He expressed his wish to punch a heckler in the face. He urged police not to “be too nice” to suspects. He shared a doctored video of himself attacking CNN in a wrestling match. He suggested supporters could use guns to stop Clinton judicial nominees and fantasized about Clinton’s security detail being taken away. Most recently, Trump hesitated to criticize Saudi Arabia for Saudi operatives’ killing of Post contributing columnist Jamal Khashoggi as the president keeps up his attacks on journalists as enemies of the people.

This has an effect. A man was arrested for threatening to shoot Boston Globe employees this summer, calling the paper the “enemy of the people.”

After the bombs were discovered Wednesday, Trump offered a soothing message: “We have to unify. We have to come together.”  Amen. But at Monday’s rally, Trump ridiculed almost those exact words, mocking Clinton’s campaign for having “some stupid slogan like ‘stay together.’ ”

I truly worry about the future and America's democracy.  History can and does repeat itself when the populace fails to pay attention and ignores the warnings from the events of the past.
Posted by Michael-in-Norfolk at Thursday, October 25, 2018

Sorry those things happened to you! Homophobes abound. But you are right, Cheeto is bringing out the worst in people and this last attempt to silence and punish anybody and everybody who criticizes him is just beyond the pale. And if people don't vote these republicans out of office, it'l only get worse....