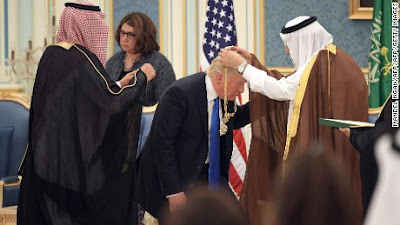 Saudi Arabia has long used its oil wealth to buy American loyalty and to guaranty American politicians' indifference to the evils of the regime.  Indeed, after the 9-11 terror attacks which were committed mostly by Saudi extremists, George W. Bush allowed special flights for Saudis to flee America even as all other flights were grounded.  What was already a toxic and unprincipled alliance has turned truly grotesque under the Trump/Pence regime lead by a man who worships money as his only god notwithstanding the ridiculous lip service given to Christofascist leaders whose only real goal was stacking the U.S. Supreme with far right ideologues.  A column in the New York Times looks at this immoral alliance and the increasing shredding of principle required to  maintain relations with a truly murderous regime.  Here are column excerpts:


The Saudis are experts on emoluments. If you don’t take their favors one way, they find another way to try to co-opt you.

Donald Trump, who may be the only person more fond of lavish displays of arriviste gilt than the Saudis, is bedazzled by a Saudi pledge to buy billions worth of American weapons, just as he was flattered by the Saudi sword dance and weird luminescent orb séance on his visit to the kingdom.

Even before the bloodcurdling execution of Jamal Khashoggi for his just criticism of Crown Prince Mohammed bin Salman, it was clear that the chump Trump and jejune Jared had bet their entire Middle East strategy on a chillingly autocratic and reckless person.

The prince was easing up on the draconian restrictions on women to get a gloss as a liberal visionary. But he was simultaneously jailing women activists, imprisoning and torturing royals and top businessmen and making America an accomplice in a grotesque war in Yemen, dropping bombs supplied by the U.S. with little care about whether civilians died, including in an attack on a school bus, killing dozens of children. This, as the self-styled children’s advocate Ivanka was out on the town, talking about the fabulous “deliverables” she and Jared were bringing to their BFFs in Riyadh.

The Saudis blithely assume abhorrence at their inhumane behavior — from beheadings to forcing teenage girls without head scarves back into a burning school to die, as the religious police did in Mecca in 2002, to the brazen murder of Khashoggi, a Washington Post columnist — can be lubricated away with oil and money.

And why shouldn’t they? Our alliance with the Saudis has always been poisoned by cynical bargains.

After the oil boom of the late ’70s, Islamic clerics were enraged at the hedonistic behavior of the royals. In order to continue with their hypocritical lifestyle, the royals offered cultural freedom and women’s rights as a sop to the fundamentalists, allowing anti-Western clerics and madrasas to flourish and giving a free pass to those who bankrolled terrorism.

Even as we hailed the Saudis as our partners in fighting terrorism, they were nurturing the monsters who would come for us. Seventeen years before the psychotic Saudi hit squad traveled to Istanbul to dismember Khashoggi while he was still alive, another psychotic Saudi hit squad traveled to America to turn planes packed with passengers into bombs.

Osama bin Laden and 15 of the 19 hijackers on 9/11 were Saudis. The Saudi royals repeatedly stymied American efforts to crack down on Al Qaeda in the years before 9/11.
But they remained our dear friends. W.’s White House allowed Prince Bandar — the dean of the Washington diplomatic corps was so close to the Bush family that his nickname was “Bandar Bush” — to spirit Bin Laden’s family members and other wealthy Saudis out of America on jets after the twin towers fell.

Even Barack Obama, who had no love lost for the Saudis, refused for eight years to release a classified document from 2002 detailing contacts between Saudi officials and some of the 9/11 hijackers, including checks from Saudi royals to operatives in contact with the hijackers and a connection between a Bandar employee and a Qaeda militant. (Bandar’s wife, Princess Haifa, wrote charitable checks that ended up in the hands of two hijackers.)Our Faustian deal was this: As long as the Saudis kept our oil prices low, bought our fighter jets, housed our fleets and drones and gave us cover in the region, they could keep their country proudly medieval.The Saudis need us more than we need them. We now produce more oil than they do. And yet we continue to coddle them and shield them from responsibility for their barbaric ways.

Because, after all, the press is the Enemy of the People, deserving a body slam. And the Saudis are our dear friends, deserving bows, hugs and kisses.