The Conundrum of Gay Republicans - Delusional, Self Loathing or Racist? 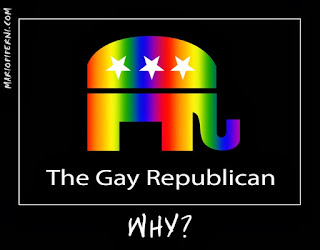 The 2018 midterm elections are two (2) weeks away and once again one is confronted with so-called gay Republicans who whether due to delusions or internalized homophobia and self-loathing are poised to vote for candidates of a political party that have more or less declared war on LGBT citizens.  With the passage of the Trump/GOP tax cuts last year, the fig leaf of supporting "fiscal conservatism" was wiped away.  Then there's the myth that the GOP supports "smaller government" even as it pushes to control women's bodies and regulate people's bedrooms.  And, if one cares about the environment, Trump and the GOP are (i) denying climate change is real and (ii) slashing regulations that protect us from air and water pollution. Not exactly responsible "smaller government."  So what motivates these gay Republicans - many of whom are privileged white males - if the GOP smaller government and fiscal responsibility they claim to support doesn't exist?  I have my theories and, my gut reaction is that it comes down to racism.  How else to explain these individuals supporting a party headed by a regime that has taken the following actions against LGBT Americans:


1.The Department of Health and Human Services is seeking to eradicate federal recognition and protection of transgender Americans by redefining gender to be based solely on a person’s genitalia at birth.

2. The Department of Labor is developing a rule to allow federal contractors to fire LGBTQ people even as Trump has sought to bar most transgender recruits from serving in the military

3. The State Department has began refusing visas for same-sex partners of U.N. diplomats and U.N. workers if they are not legally married in their home country (even those from countries where same-sex marriage is not legal).

4.The Department of Health and Human Services with the assistance of the Trump/Pence Department of Justice is allowing health care providers to discriminate against LGBTQ people on the basis of “moral objection.”

5.  Betsy DeVos, Trump's Secretary of Education, and the Department of Education  have refused to protect transgender students from bullying and harassment.

7.The Department of Justice gutted policies that protect transgender people from employment discrimination and has filed legal briefs supporting the right of employers to fire LGBT employees based on anti-LGBT animus.

9.  The Department of Commerce removed sexual orientation and gender identity from the proposed 2020 Census survey.

10.  Trump announced the “Deploy or Get Out” rule, which could remove HIV+ military personnel from service.

11.  The Trump administration asked the Supreme Court to allow businesses to discriminate against LGBTQ people.

13.  The Trump White House has yet to appoint an LGBTQ liason.

14.  The Trump White House refused to acknowledge Pride Month for the second year in a row.

15.  Trump has appointed two (2) anti-gay justices - Gorsuch and Kavanaugh - to the U.S. Supreme Court who, with the other "conservatives" could roll back past court rulings affirming LGBT rights.

As I note above, there would appear to be no reason for any gay individual to vote Republican unless they are either (i) subsumed with greed and place tax cuts above their own civil rights and dignity, or (ii) subscribed to the white supremacy that now is a main plank in the GOP agenda.

Posted by Michael-in-Norfolk at Tuesday, October 23, 2018

Oh, I would say they're delusional, self-loathing AND racist. Can't with them. Ugh.