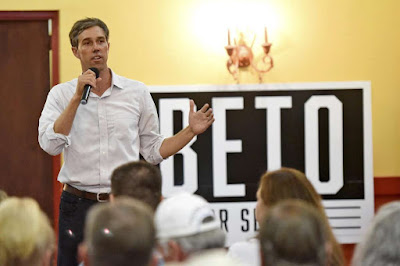 It's always an embarrassment for a state wide political candidate to have their hometown newspaper endorse and out of town opponent.  Yet that's what has happened to Ted Cruz who the same paper had endorsed when he last ran for the U.S. Senate.  Having seen the real Ted Cruz in action, the Houston Chronicle - which has a history of endorsing Republicans - endorsed Beto O'Rourke for the Senate race, trashing Cruz in the process.  Houston is part of the growing "blue" urban base for Democrats in Texas which to date, unlike what has happened in Virginia, still lacks enough votes to out vote the reactionary, racist rural areas of Texas. The Chronicle's main complaint: Cruz has not been representing the interests of Texas or average Texans.  Instead he has been on a quest of running for president and ignoring his duties.  Here are editorial highlights:

With eyes clear but certainly not starry, we enthusiastically endorse Beto O'Rourke for U.S. Senate. The West Texas congressman's command of issues that matter to this state, his unaffected eloquence and his eagerness to reach out to all Texans make him one of the most impressive candidates this editorial board has encountered in many years. Despite the long odds he faces – pollster nonpareil Nate Silver gives O'Rourke a 20 percent chance of winning – a "Beto" victory would be good for Texas, not only because of his skills, both personal and political, but also because of the manifest inadequacies of the man he would replace.

Ted Cruz — a candidate the Chronicle endorsed in 2012, by the way — is the junior senator from Texas in name only.  Exhibiting little interest in addressing the needs of his fellow Texans during his six years in office, he has kept his eyes on a higher prize. He's been running for president since he took the oath of office — more likely since he picked up his class schedule as a 15-year-old ninth-grader at Houston's Second Baptist High School more than three decades ago. For Cruz, public office is a private quest; the needs of his constituents are secondary.

It was the rookie Cruz, riding high after a double-digit win in 2012, who brazenly took the lead in a 2013 federal government shutdown, an exercise in self-aggrandizement that he hoped would lead to the repeal of the Affordable Care Act. Cruz, instead, undercut the economy, cost taxpayers an estimated $2 billion (and inflicted his reading of Dr. Seuss's "Green Eggs and Ham" on an unamused nation). Maybe the senator succeeded in cementing in his obstructionist tea party bona fides, but we don't recall Texans clamoring for such an ill-considered, self-serving stunt.

Cruz's very first vote as senator was a "nay" on the Disaster Relief Appropriations Act, a bill authorizing $60 billion for relief agencies working to address the needs of Hurricane Sandy victims. More than a few of Cruz's congressional colleagues reminded him of that vote when he came seeking support for Hurricane Harvey relief efforts.

Voters don't send representatives to Washington to win popularity contests, and yet the bipartisan disdain the Republican incumbent elicits from his colleagues, remarkable in its intensity, deserves noting. His repellent personality hamstrings his ability to do the job.

"Lucifer in the flesh," is how Republican former House Speaker John Boehner described Cruz, adding: "I get along with almost everyone, but I have never worked with a more miserable son of a bitch in my life."

Former U.S. Sen. Kay Bailey Hutchison, a Texas Republican who was adept at tending to Texan needs and who worked tirelessly on the state's behalf, once reminded the Chronicle editorial board that Cruz would have to decide where his loyalties lay when he got to Washington: with fellow Texans or fellow obstructionist ideologues. Six years later, it's obvious he's decided.

Cruz's challenger is running as an unapologetic progressive. He supports comprehensive immigration reform, including a solution to the Dreamer dilemma; health care for all; an end to the war on drugs (including legalizing marijuana); sensible (and constitutional) gun control, and other issues that place him in the Democratic mainstream this political season.

What sets O'Rourke apart, aside from the remarkable campaign he's running, are policy positions in keeping with a candidate duly aware of the traditionally conservative Texas voter he would be representing in the U.S. Senate. Representing a congressional district that includes Fort Bliss and numerous military retirees, he has focused on improving the U.S. Department of Veterans Affairs, with special attention to mental health. He's a strong believer in free trade and global markets, an economic position that should appeal to pragmatic Houston business interests.

As a lifelong border resident, O'Rourke supports our trade ties with Mexico and our need to sustain and encourage those ties (despite the anti-Mexican malice that emanates from the White House).

"While he may look like the second coming of Bobby Kennedy to D.C. pundits," political scientist Jay Aiyer of Texas Southern University has written, "Texans can see that O'Rourke has more in common with the politics and approach of former Lt. Gov. Bill Hobby, who advocated for modernizing Texas through bipartisan cooperation during his time leading the Texas Senate."

There's one more reason O'Rourke should represent Texas in the U.S. Senate: He would help to serve as a check on a president who is a danger to the republic. Cruz is unwilling to take on that responsibility.

[I]magine how refreshing it would be to have a U.S. senator who not only knows the issues but respects the opposition, who takes firm positions but reaches out to those who disagree, who expects to make government work for Texas and the nation. Beto O'Rourke, we believe, is that senator.