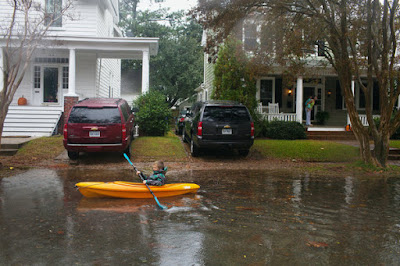 November 6, 2018, is fast approaching and voters have the choice between (i) candidates of a political party that denies that climate change is occurring and that is tearing down environmental regulations that seek to slow the climate change process, and (ii) candidates of the opposing party that see climate change among the most pressing problem facing the federal government.  While sadly a number of local "friends" are falling for the racist, xenophobic message of the climate change deniers, those with waterfront properties might want to rethink who they will vote for on election day.  In Hampton Roads the value of waterfront properties is falling or, at best appreciating far more slowly than the values of properties on high ground away from the water.  The phenomenon not only hits homeowners in the pocket books as their typically biggest investment is harmed, but it also erodes city tax bases.  In short, everyone loses in one form or another -  all so Republicans can pander to an ignorance embracing party base.  A piece in the Virginian Pilot looks at the problem which is not confined to Southside cities.   Here are excerpts:

Waterfront homes used to be the safest investment in real estate, but rising tides have turned a sure thing into a potential liability.

After a review of property value data and a litany of studies, The Virginian-Pilot has found mounting evidence that real estate values across Hampton Roads are being driven down as a result of recurrent flooding and sea level rise.

One couple in Norfolk has had their waterfront house, once valued at more than a million dollars, on the market for two years. They’ve dropped the price to less than $800,000 and are still waiting for a buyer.

And it’s not just seven-figure waterfront homes in Norfolk and Virginia Beach taking the hit. Values of seemingly safe houses several blocks from the water are hurting as well.

Several recent studies have shown that impacts from flooding – from water in the basement to inundated streets – already have hamstrung property prices and cost Hampton Roads homeowners hundreds of millions of dollars in lost or unrealized values.  Homeowners might be surprised by these staggering numbers – in many places where research shows flooding is hurting home prices, city assessments show those values rising. They’re just not rising as fast as they could be.

“Part of the idea of getting these numbers out there is that people may not know they’ve lost value, because the actual value may still be going up,” said Jeremy Porter, a Columbia University professor who worked on the recent study with the First Street Foundation, a nonprofit that pushes for solutions to sea level rise by presenting data.

[R]eal estate agents to academics to homeowners agree that recurring flooding and rising seas are driving down the value of what were once considered desirable investments.

A group from First Street and academics from Columbia University developed Flood iQ, a website that allows people to see how the values of waterfront homes have fared since 2006 when compared to similarly valued homes that don’t deal with flooding.

The Washington Post recently highlighted Flood iQ and two other academic studies that came to the same conclusion: Coastal property values aren’t keeping pace. The First Street group studied the values of homes from Virginia to Florida dating back to 2006 and found they’re worth $7.4 billion less than they would be otherwise.

Three-quarters of that loss was due not to flooding homes, but flooding streets, said Steven McAlpine of First Street Foundation.

Our home is on what was once the premier street in Hampton.  After seeing the value drop during the real estate meltdown of a decade ago, the value has stabilized but has not appreciated as one might expect.  Why?  We are located on a tidal creek with 4.6 acres of creek and marsh - the setting is gorgeous but the threat of flooding only too real.
Posted by Michael-in-Norfolk at Sunday, October 21, 2018