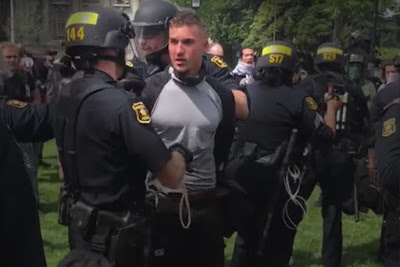 Hate crimes committed by far right groups and white supremacists are on the rise yet Trump and Republicans are depicting Democrats as a "dangerous mob."  It is part and parcel with the campaign of fanning racial fears that put Trump in the White House.  Sadly, his supporters can nothing about the truth and seem only too happy to disseminate outlandish posts that have the look of deriving from Russian bots (I just "unfriended" two people on Facebook because I could not stand seeing the utterly batshit crazy and racist stuff they were parroting).   Demonstrating were the true threat to civil order is really coming from, the FBI has arrested a number of white nationalists who have engaged in the behavior Trump pretends to condemn notwithstanding the incendiary rants at his "campaign rallies" which look like smaller versions of Hitler's infamous Nuremberg rally.  A piece in the New York Times looks at some of these arrests.  Here are excerpts:


The F.B.I. arrested the leader of a violent California neo-Nazi gang on a federal conspiracy charge after he fled the country earlier this month.

Robert Rundo, 28, of Huntington Beach, Calif., is being held at the federal jail in downtown Los Angeles. He was charged in a criminal complaint that was unsealed Tuesday.

He is the founder of the Rise Above Movement, a neo-Nazi gang based in Southern California whose members were involved in violent activity at protests throughout California in 2017. He and three other Californians associated with the group — Robert Boman, 25, Tyler Laube, 22, and Aaron Eason, 38 — were charged with inciting riots, according to court documents. Mr. Boman and Mr. Laube were arrested on Tuesday morning in Southern California. The F.B.I. said it was still searching for Mr. Eason.

Earlier this month, another four members of the Rise Above Movement — Benjamin Daley, Michael Miselis, Thomas Gillen and Cole White — were indicted on conspiracy to riot charges for attacking counterprotesters during last year’s Unite The Right rally in Charlottesville, Va. Mr. Rundo left the country shortly after the four were arrested at the beginning of the month.

The F.B.I. said that Mr. Rundo and other members of the group attacked protesters in 2017 in several places, including Huntington Beach, Calif.; the University of California, Berkeley campus; San Bernardino, Calif.; and Charlottesville, Va. The criminal complaint outlined the group’s hateful ideology and its embrace of violence.

At a rally on March 25, 2017, in Huntington Beach, Mr. Laube grabbed a journalist and punched him in the face three times, according to videos of the incident that the F.B.I. referenced in the complaint. During the same rally, the F.B.I. said videos showed that Mr. Rundo punched one protester in the back of the head, and then assaulted a second protester.

Later that same day, Mr. Daley, who was at the rally, sent a text message to another member of the group bragging about the incident: “Front page of the stormer we did it fam.” The stormer is a reference to “The Daily Stormer,” the neo-Nazi website.

In April 2017, Mr. Rundo and others traveled to Berkeley, Calif. Video referenced in the complaint showed the men taping their hands in preparation for fighting and wearing skeleton masks. Mr. Boman is also seen punching at least two people. Mr. Rundo later attacked another protester and then punched a Berkeley police officer twice in the head before he was subdued and arrested.

The F.B.I. said that Mr. Rundo and other gang members used the internet “to prepare to incite and participate in violence” at various political events and committed violent assaults while at those events. The F.B.I. added that the men applauded each other for the attacks and “publicly documented their assaults in order to recruit more members” to carry out violence.

Before founding the Rise Above Movement, Mr. Rundo served 20 months in a New York State prison for stabbing a rival gang member from MS-13 in a 2009 attack in Flushing, Queens. At the time, he was part of a small, multiracial neighborhood gang called the Original Flushing Crew, which was in a feud with a subset of MS-13, known as the Guanacos Little Cycos Salvatruchas, according to a 2012 federal indictment.

Since creating his movement sometime around 2017, Mr. Rundo has established ties between the group and the West Coast chapter of the Hammerskins, an international network of neo-Nazi skinheads whose members have been involved in at least nine murders in four states.

Earlier this year, Mr. Rundo traveled to Europe with members of his group in order to participate in mixed-martial arts tournaments hosted by neo-Nazi organizations in Germany and Ukraine. While in Europe, the F.B.I. said that Mr. Rundo and others celebrated Adolf Hitler’s birthday and met with European white supremacists.

Frightening to say the least.  And these dangerous individuals are part of the Trump/Pence regime's base.
Posted by Michael-in-Norfolk at Thursday, October 25, 2018