"MAGA Bomber" - A Portrait of a Growing Segment of the GOP 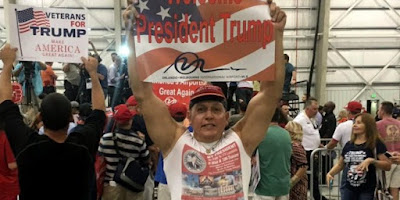 When the first pipe bombs sent to CNN and prominent Democrats who are constantly targeted by Donald Trump, a/k/a Der Trumpenführer, began to be discovered, many on the right - think Rush Limbaugh, Sean Hannity, et. al. -  claimed they were a "false flag operation" backed by liberals. Indeed, Der  Trumpenführer twisted reality into claiming that he was the victim, not the addressees on the bomb-containing packages.  They had no evidence, of course, but nowadays, evidence and facts are devoid for what passes for news and discourse on the right.  Deliciously, when Fox News tried to secure the rights to use a photo of Cesar Sayoc's van covered with pro- Trump and anti-CNN and liberal stickers, the couple who had taken the picture replied they "won't allow you guys to use it [the photo] because you aren't a reliable source of what's going on in our country today. Sorry!"  Now, as facts about Sayoc have emerged, as disturbed as he is, he is a portrait of the core base of the GOP: inspired by hatred and extremism and blindly eating up Trump's lies.  A piece in New York Magazine looks at the right's crumbling and dishonest effort to disavow Sayoc and the causation of Trump rhetoric that he subscribed to whole-heartedly.  Here are article highlights:

Rush Limbaugh, the most influential conservative talk show host in the country, and a man whom Republicans made an honorary member of the 1995 freshman class in recognition of his role in helping them win the House majority, explained recently that the still-anonymous bomber could not be on the political right. “Republicans just don’t do this kind of thing,” he explained. “From the Haymarket riot to the Unabomber, bombs are a liberal tactic,” added Ann Coulter.

The discovery that the person suspected of mailing bombs to various figures Donald Trump has described as enemy threats is in fact a Trump-supporting Republican has necessitated a change in emphasis. Whereas before conservatives insisted the bomber’s method told us everything we needed to know about his ideology, now they insist it tells us nothing at all about his ideology. “Crazy person attacks Republican Congresspeople: blame the crazy. Crazy person sends bombs to Democrats: blame the Republicans,” tweets right-wing commentator Ben Shapiro, whose analysis was recirculated by Donald Trump Jr.

It is of course true that the overwhelming majority of Republicans are not violent. . . . . Nonetheless, the relationship between the two parties and violence is not symmetrical, and the fact that alleged bomber Cesar Sayoc had a strong identification with Trump and his partisan message is not a coincidence. The Republican Party encompasses an extremist fringe that nurtures violence in a way the Democratic Party does not.

Political violence — when it is attached to political ideology at all, as opposed to simple mental illness — is associated with Manichean, paranoid, illiberal thought. That is a description of a large and steadily growing wing of conservative politics. . . . . Sensible conservatives roll their eyes at this sort of nuttery, but by this point in history, such modes of delusional thought have gained such deep inroads in the party that purging them is a hopeless task.

Even figures as deranged as Limbaugh have long since found themselves outflanked by even more deranged minds like Alex Jones, who has received respectful attention from President Trump, himself an avid conspiracy theorist. Trump has praised a member of Congress for assaulting a reporter; pardoned ranchers who inspired a right-wing militia attack, the right-wing conspiracist Dinesh D’Souza, and lawless authoritarian racist Joe Arpaio; literally today, at an event in which he was attempting to project some measure of dignity and decorum, Trump invoked a far-right conspiracy theory by attacking George Soros as a “globalist” and chuckling appreciatively at an audience member shouting “Lock him up!”

The left certainly has illiberal, paranoid modes of thought. The difference is that the left-wing version resides outside the boundaries of two-party politics, because the Democratic Party is fundamentally liberal not radical. . . . . The street-fighting cult antifa lies outside of, and is primarily hostile to, Democratic politics. Left-wing violence from the 1960s likewise came out of radical groups who viewed the Democratic Party with contempt.

The Republican Party, on the other hand, has followed a course that has made its rhetoric amenable to extremism. Republican radicalism enabled the rise of a conspiratorial authoritarian president, and that president has expanded the bounds of the party’s following farther out to the fringe. It is getting harder and harder to distinguish the “normal” elements of conservatism from the “kook” parts. That some of those kooks would resort to violence is not an accident but a statistical likelihood. Trump’s party is a petri dish for diseased minds.

Decent, moral people ought to be embarrassed to admit they are Republicans.   The fact that people don't speaks volumes about them and none of it good.
Posted by Michael-in-Norfolk at Saturday, October 27, 2018

Yep. That’s why I don’t currently have republican ‘friends’.