Donald Trump Is a Crook 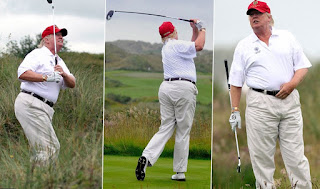 A piece in New York Magazine cuts to the chase and addresses what his racist, white supremacist, knuckle dragging supporters - and the Vichy Republicans - simply want to ignore: the man is a crook and has been for years.  Indeed, Trump is a profiteer who is openly abusing his office to enrich himself and his family much in the style of third world despots and Vladimir Putin if on a much lesser scale.  The fact that none of Trump's profiteering bothers the Congressional Republicans underscores just how morally bankrupt the GOP has become. Stealing from the poor to give the very rich now stands side by side with turning a blind eye to Trump's violation of the emoluments clause of the Constitution and business practices that only a few years ago would have driven a president from office.  Here are column highlights:

On November 17, 1973, President Richard Nixon delivered a speech that became famous for his self-defeating boast, “I am not a crook.” The windup to the infamous phrase consisted of Nixon defending his aggressive, but legal, tax-avoidance strategies. “I made my mistakes, but in all of my years of public life, I have never profited, never profited from public service — I have earned every cent,” he insisted. (This was perhaps half-true.) “And in all of my years of public life,” he continued, “I have never obstructed justice.” (This was not true — the year before, Nixon had tried to get the CIA to quash the FBI investigation into Watergate.)

Like Nixon, Donald Trump denies having engaged in obstruction of justice, even though he plainly has (both by asking intelligence agencies to push back against the FBI, according to reports, and by firing the FBI director over the Russia investigation, by Trump’s own admission). Unlike Nixon, Trump does not deny profiting from public service. He does it brazenly and flamboyantly.

If he were a normal president, rather than one who produced calamities at an unprecedented pace, Trump’s open profiteering would receive five-alarm media coverage and threats of impeachment. The Washington Post recently reported that Trump’s budget slashes funding for a wide array of low-income housing programs, the one notable exception being a program that his own firm benefits from. The story connects this shady decision to an even shadier one: Trump’s appointment of Lynne Patton — a wedding planner close to the Trump family who possesses zero relevant experience and who has falsified her résumé — to oversee the Department of Housing and Urban Development’s programs in New York City. That is, Trump is using his budget to suspiciously single out for favoritism a program from which his firm benefits, and then installing a wildly unqualified personal loyalist in a position where she could protect his funding stream. This scandal alone could shake a non-Trump presidency to its foundations.

That it has caused barely a ripple helps to explain why Trump feels emboldened to locate the first fundraiser for his reelection campaign at his hotel in Washington. Trump’s Washington hotel has already raked in cash from lobbyists and government officials, foreign and domestic, seeking to curry favor with the First Family. Trump has gotten away with it because his party has evinced zero interest in restraining him. The GOP Congress has quashed investigations of his profiteering or demands that he produce his tax returns. Now the party elite will literally be suborned at an event conjoining his public duties and the fattening of his own wallet.

History has mostly forgotten what Nixon said after his famous line: “I am not a crook. I have earned everything I have got.” The premise of that statement was that a president who enriches himself through office is a crook. So, what does that make Donald Trump?