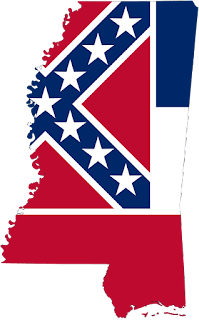 Emboldened by the election of Donald Trump, a number of Republican controlled state legislatures rushed to pass falsely named "religious freedom" laws that would allow open discrimination against LGBT citizens.  Backward hell hole, Mississippi was among the first states to pass such a bill (a less hideous bill in Virginia was vetoed by Democrat Governor Terry McAuliffe).   Now, the U.S. Circuit Court of Appeals for the 5th Circuit on Thursday ruled that Mississippi can start enforcing a law that will let merchants and government employees cite religious beliefs to deny services to same-sex couples.  The ruling reversed the District Court ruling that had blocked the law before it could take effect last July.  How the Court believes that openly targeting a minority for mistreatment will pass muster under Supreme Court rulings such as Romer v.Evans is baffling.  There has never been much reason to visit Mississippi, now there is even less reason to do so.  To my "friends" and acquaintances who have said that I and other taxpaying LGBT citizens have nothing to fear under Trump/the GOP, my comment is this: when are you going to pull your head out of your ass and wake up to reality? Blogger friend Joe Jervis looks at this disturbing development.  Here are are excerpts:

A federal appeals court says Mississippi can start enforcing a law that will let merchants and government employees cite religious beliefs to deny services to same-sex couples. The 5th U.S. Circuit Court of Appeals on Thursday reversed a judge’s decision that had blocked the law before it could take effect last July.

U.S. District Judge Carlton Reeves had ruled that the law unconstitutionally establishes preferred beliefs and creates unequal treatment for LGBT people. Republican Gov. Phil Bryant and other supporters say the law protects beliefs that marriage can be between only a man and a woman, and that a person’s gender is determined at birth and cannot be changed.

Via press release from Lambda Legal:

Overruling the lower court decision, a three-judge panel of the Fifth Circuit denied that LGBT Mississippians are subject to imminent discrimination by HB 1523 and ordered the block to the law lifted because the plaintiffs—a group of ministers, LGBT residents, community leaders and activists—lack standing since they cannot claim a specific harm caused by the law that has yet to go into effect.

“We had to put guards in front of our church after the bill initially passed because there was a truck with a swastika parked across the street and just this week the Christian Knights of the KKK distributed flyers throughout the Hattiesburg area. Today’s ruling leaves us more exposed, so we will have to be more vigilant than ever before to protect our church, our families and our dignity,” said Brandiilyne Mangum-Dear, Barber plaintiff.

Note: government employees can now discriminate.  So much for equality under the law.  The Christofascists want nothing less than an established religion in violation of the U.S. Constitution.  Political whores in the GOP are only too happy to prostitute themselves to these foul people.