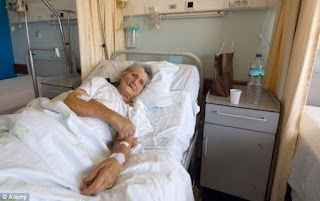 While much secrecy continues to surround the "healthcare reform" bill being drafted by Senate Republicans, some of the information that has leaked so far indicate that it will make massive cuts to Medicaid - the life line for millions of children, elderly, pregnant mothers and those with physical and intellectual disabilities.  Sadly, it is part and parcel with the GOP agenda of taking from the poor and middle class and giving to the very wealthy.  It is also in keeping with the GOP hypocrisy drenched claims that it is the party of Christian values even as it adopts policies that are the absolute opposite of the Gospel's social agenda.  And make no mistake, if enacted the GOP bill will harm the lives of millions of Americans, both young and old. A piece in the New York Times looks at the leaked details to date.  When you see your Republican friends, ask them if they support ending medical care for children or throwing elderly patients out of nursing homes.  When they say they do not, throw it in their faces that, yes the do if the voted for Trump/the GOP candidates last November.  Here are article highlights:

Tucked inside the Republican bill to replace Obamacare is a plan to impose a radical diet on a 52-year-old program that insures nearly one in five Americans.

The bill, of course, would modify changes to the health system brought by the Affordable Care Act. But it would also permanently restructure Medicaid, which covers tens of millions of poor or disabled Americans, including millions who are living in nursing homes with conditions like Alzheimer’s or the aftereffects of a stroke.

The results, according to independent analyses, would be major reductions in federal spending on Medicaid over time. States would be left deciding whether to raise more money to make up the difference, or to cut back on medical coverage for people using the program. The Congressional Budget Office estimates that the changes would lead to a reduction in spending on Medicaid of more than $800 billion over a decade. (That figure also includes additional cuts to the Obamacare Medicaid expansion.)

About half of all births in the country are covered by Medicaid, and nearly 40 percent of children are covered through the program. Medicaid covers the long-term care costs of two-thirds of Americans living in nursing homes, many of them middle-class Americans who spent all of their savings on care before becoming eligible.

It covers children and adults with disabilities who require services that most commercial health insurance doesn’t include. It covers poor women who are pregnant or raising young children. Those populations were all included in the program before Obamacare became law.

It also provides insurance for poor adult Americans, and recent evidence shows that its expansion under Obamacare has given more poor people access to health care services and reduced their exposure to financial shocks.

“While details remain elusive, this is shaping up to be the largest intergovernmental transfer of financial risk in our country’s history,” said Matt Salo, the executive director of the National Association of Medicaid Directors, in an email. Mr. Salo said that some of his directors would welcome caps if they came with more program flexibility, but said the current approach amounted to a funding cut.

Most researchers who study the program closely say that it is already quite lean. Major savings, they say, will be hard to achieve without reducing medical benefits or cutting higher-cost patients from the program.

Trump administration officials and Republican members of Congress have argued that the Medicaid changes won’t cause anyone to lose insurance coverage directly. That statement is true in only the narrowest sense.

Because the funding cuts would fall to states, it is state officials who would decide whether to save money by raising taxes, reducing payments to nursing homes oreliminating benefits like home-based care for disabled beneficiaries, a few available options under the law.

The Congressional Budget Office estimates that enrollment in Medicaid would decline substantially over a decade, as states pursued a variety of strategies to save money, some of which would push people out of the program.

Several Republican senators have expressed concerns about changes to Obamacare’s Medicaid expansion, which broadened the program to include more low-income adults in 31 states.

Others worry about changes to private insurance subsidies that would make insurance less affordable to older, middle-class Americans. Fewer have spoken out about the cuts to Medicaid’s legacy beneficiaries. That means that, as the Senate works out final details, the forced diet for Medicaid is likely to stay in the bill.