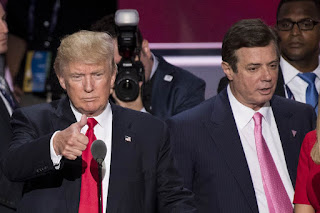 While Der Trumpenführer continues to rant that the Russiagate probe is a "witch hunt" it seems that prosecutors and grand jurors in the Alexandria, Virginia division of the U.S. District Court for the Eastern District of Virginia may believe otherwise as the Washington Post breaks the news that a new round of subpoenas have been issued to Paul Manafort and his wife.  It appears that even as concerns were rising in America about Russian involvement in attacks on the U'S.'s election process, Paul Manafort continued to meet with his "friend" with ties to Russian military intelligence.  Here are excerpts from the Post story:

In August, as tension mounted over Russia’s role in the U.S. presidential race, Donald Trump’s campaign chairman, Paul Manafort, sat down to dinner with a business associate from Ukraine who once served in the Russian army.

Konstantin Kilimnik, who learned English at a military school that some experts consider a training ground for Russian spies, had helped run the Ukraine office for Manafort’s international political consulting practice for 10 years.

At the Grand Havana Room, one of New York City’s most exclusive cigar bars, the longtime acquaintances “talked about bills unpaid by our clients, about [the] overall situation in Ukraine . . . and about the current news,” including the presidential campaign, according to a statement provided by Kilimnik, offering his most detailed account of his interactions with the former Trump adviser.

[T]he previously unreported dinner was one of two meetings he had with Manafort on visits to the United States during Manafort’s five months working for Trump. The first encounter was in early May 2016, about two weeks before the Trump adviser was elevated to campaign chairman.

Kilimnik’s name also appeared this spring in a previously undisclosed subpoena sought by federal prosecutors looking for information “concerning contracts for work . . . communication or other records of correspondence” related to about two dozen people and businesses that appeared to be connected to Manafort or his wife, including some who worked with Manafort in Kiev.

The subpoena was issued by a federal grand jury in the Eastern District of Virginia, where, until recently, Manafort’s business was headquartered. The subpoena did not specify whether it was related to the FBI’s investigation of Russian interference in the U.S. election or a separate inquiry into Manafort’s business activities. Investigators in the Eastern District of Virginia have been assisting with the Russia investigation.

Before joining Trump’s campaign, Manafort had built a practice in Ukraine as an adviser to the Russia-friendly Party of Regions and helped elect former president Viktor Yanukovych, who was ousted in 2014 and fled to Russia. Manafort kept his Kiev office open until mid-2015.

Federal investigators have shown an interest in Manafort on several fronts beyond his work on behalf of Trump.  Subpoenas in New York have sought information about Manafort’s real estate loans, according to NBC News. Justice Department officials also are exploring whether Manafort should have more fully disclosed his work for foreign political parties, as required by federal law.

Kilimnik said he was trained in English and Swedish and spent the early 1990s serving as a military translator, including in 1993 on a trade mission of a Russian arms company. . . . Stephen Blank, a Russia expert at the American Foreign Policy Council, a Washington think tank, and a longtime former instructor at the U.S. Army War College, called the institute a “breeding ground” for intelligence officers.  Mark Galeotti, a Russia security specialist at the Institute of International Relations, a Prague-based foreign policy think tank, said the school is one of the “favored recruiting grounds” of the GRU.