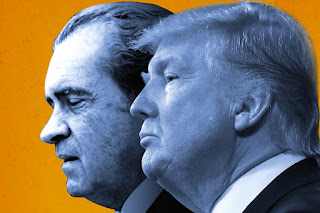 As America hurtles down the road to what ought to result in the impeachment - if not criminal prosecution of Der Trumpenführer (and Mike Pence who claims to know nothing much like Sergeant Schultz in Hogan's Heroes) - we are faced with the frightening reality that the White House is occupied by a mentally imbalance criminal and that the Vichy Republicans will likely do nothing about it.  Andrew Sullivan has a good review of what could be the beginning of the end of American democracy.  Even long time Republican apologist David Brooks of the New York Times seems to have belatedly realized last month the danger that Trump and his enablers in the GOP pose to the world, not just America, in a piece entitled "When the World is Led by a Child."  Republicans talk ad nausea about  patriotism and being the representatives of "real Americans" yet they are now the party of treason and the destruction of the rule of law that however imperfect has guided America.  They seemingly would be fine with a Putin style dictatorship so long as they held onto their offices and perks.  It is a situation that is beyond disturbing.  Here are highlights from Sullivan's piece:

Let me put this as simply as I can. After firing FBI Director James Comey for investigating the Trump campaign’s contacts with Russians, the president is now openly smearing and threatening to fire his successor as most prominent investigator, special counsel Robert Mueller. There is no question about the motive behind all this, because Trump has told anyone within hearing distance or access to a television that he fired Comey to kill a vital and important investigation into Russian interference in our elections, which yesterday Putin all but admitted: “They meddle in all other countries’ affairs, what did they expect?”

This is now a slow-moving version of Nixon’s Saturday Night Massacre — but graver. It’s graver because the original crime — the Kremlin’s attempt to hack our elections in possible cahoots with some on the Trump campaign — has so much wider ramifications than an office break-in. It’s an act of virtual war by a foreign adversary that came close to rigging the voting machines, for Pete’s sake. If it was in any way abetted by an American connected to Trump, we absolutely need to find out. And this crisis is more dangerous because the president has not only been trying to prevent or rig any such investigation for months — demanding personal loyalty from the FBI director, pressuring national intelligence officials to exonerate him before the inquiry is finished — but also continues to boast about this obstruction of justice as if there were nothing wrong with it at all.

Which brings us to Trump’s mental illness, by which I mean simply that he would not pass a clinical psych test for any other job in the country. Yesterday morning, the mad king tweeted: “They made up a phony collusion with the Russians story, found zero proof, so now they go for obstruction of justice on the phony story. Nice.” He then called Mueller “a very bad and conflicted” individual.

The truth is Trump cannot abide any kind of investigation of his campaign or of himself by anyone. That would require him to defer to someone else, and his psyche cannot let that happen. (This is the core reason behind his refusal to release his tax returns.) The very idea of actually wanting inspection to clear his name simply doesn’t occur to him. After a lifetime of lying, fraud, debt, secrecy, and bankruptcy, his instinct is always to deny everything and to do all he can to subvert any smidgen of accountability or transparency.

He literally knows no other way. And he is likely to keep doing this — especially if he is now under direct scrutiny for abuse of power. Asking him to subject himself to a neutral third-party inquiry comes as easily to him as it would to Putin or Duterte or Mugabe. It seems absurd to them — and they, like Trump, would react with incandescent rage.

Again, it takes a while for this to register. But the president, in his anger, is now asserting that the FBI inquiry was initiated by nameless people who already knew that there was no basis to the allegations. Therefore the investigation is “the single greatest witch-hunt in American political history” — surpassing the lowest lows of McCarthyism no less. If Trump cannot stop the investigation, he is doing all he can to delegitimize it, whatever the costs to the credibility of our system of government.

[T]his is more potentially lethal to our democracy than Watergate because today’s Republican Party is utterly different than Nixon’s. It has been taken over by a mass movement led by a cult idol and there are no Republicans of any stature or heft who are prepared to stand up to him, as some once famously did with Nixon.

The official RNC talking points in response to the latest Washington Post bombshell about Trump himself being under scrutiny include this beaut: “This story is nothing more than an example of even more leaks coming out of the FBI and special counsel’s office in an effort to undermine the President.”  The right-wing media chorus is also instantly on fleek.

And so it seems to me completely plausible — even inevitable — that Mueller will be fired too at some point. More saliently, if his team’s work eventually exposes and proves Trump’s obstruction of justice, the only possible recourse, impeachment, will never happen. There will never be 18 Republican senators who will vote against the leader in this Congress or any other. We will have a criminal in the White House indefinitely, utterly impervious to sanction, and emboldened even further. And he will have brought almost half the country along with him, digging deeper in with every news cycle.

Over a year ago, in this magazine’s pages, I wrote the following sentence: “In terms of our liberal democracy and constitutional order, Trump is an extinction-level event.” We are about to find out if I was right.

At certain times Donald Trump has seemed like a budding authoritarian, a corrupt Nixon, a rabble-rousing populist or a big business corporatist.

But as Trump has settled into his White House role, he has given a series of long interviews, and when you study the transcripts it becomes clear that fundamentally he is none of these things.

At base, Trump is an infantalist. There are three tasks that most mature adults have sort of figured out by the time they hit 25. Trump has mastered none of them. Immaturity is becoming the dominant note of his presidency, lack of self-control his leitmotif.

First, most adults have learned to sit still. But mentally, Trump is still a 7-year-old boy who is bouncing around the classroom.

His inability to focus his attention makes it hard for him to learn and master facts. He is ill informed about his own policies and tramples his own talking points. It makes it hard to control his mouth. On an impulse, he will promise a tax reform when his staff has done little of the actual work.

Second, most people of drinking age have achieved some accurate sense of themselves, some internal criteria to measure their own merits and demerits. But Trump seems to need perpetual outside approval to stabilize his sense of self, so he is perpetually desperate for approval, telling heroic fabulist tales about himself.

He is thus the all-time record-holder of the Dunning-Kruger effect, the phenomenon in which the incompetent person is too incompetent to understand his own incompetence. . . . He is perpetually surprised because reality does not comport with his fantasies.

Third, by adulthood most people can perceive how others are thinking. For example, they learn subtle arts such as false modesty so they won’t be perceived as obnoxious.  But Trump seems to have not yet developed a theory of mind.