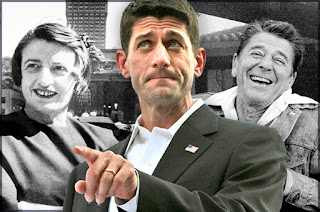 Republicans have been peddling the same voodoo economics since 1980 and, despite their formula's failure to ever work as claimed, they are back pushing it with a vengeance both in terms of proposed tax cuts (including ending the estate tax that would only benefit married couples with a combined estate of almost $11 million) and through healthcare "reform" which would provide enormous tax cuts to the very wealthy.  Most recently Kansas Republicans led by homophobic nutcase Sam Brownback implemented the full package of Republican economic principles and it proved to be an utter disaster that led to severe cuts in governmental services and budget crisis.  Only tax increases save the state's operations and economy.  Yet despite this real life experience, the Congressional Republicans appear posed to implement a still secret revised version of Trumpcare that will likely harm literally millions of Americans, including many of the fools who fell for Trump's calls appealing to their racism and bigotry and put a wholly unfit individual in the White House.  A column in the New York Times looks at the brain dead GOP:

Zombies have long ruled the Republican Party. The good news is that they may finally be losing their grip — although they may still return and resume eating conservative brains. The bad news is that even if zombies are in retreat, vampires are taking their place.

What are these zombies of which I speak? Among wonks, the term refers to policy ideas that should have been abandoned long ago in the face of evidence and experience, but just keep shambling along.

The right’s zombie-in-chief is the insistence that low taxes on the rich are the key to prosperity. This doctrine should have died when Bill Clinton’s tax hike failed to cause the predicted recession and was followed instead by an economic boom. It should have died again when George W. Bush’s tax cuts were followed by lackluster growth, then a crash. And it should have died yet again in the aftermath of the 2013 Obama tax hike — partly expiration of some Bush tax cuts, partly new taxes to pay for Obamacare — when the economy continued jogging along, adding 200,000 jobs a month.

Despite the consistent wrongness of their predictions, however, tax-cut fanatics just kept gaining influence in the G.O.P. — until the disaster in Kansas, where Gov. Sam Brownback promised that deep tax cuts would yield an economic miracle. What the state got instead was weak growth and a fiscal crisis, finally pushing even Republicans to vote for tax hikes, overruling Brownback’s veto.

Will this banish the tax-cut zombie? Maybe — although the economists behind the Kansas debacle, who have of course learned nothing, appear to be the principal movers behind the Trump tax plan, such as it is.

But even as the zombies move offstage, vampire policies — so-called not so much because of their bloodsucking nature, although that too, as because they can’t survive daylight — have taken their place.

Last month House Republicans rammed through one of the worst, cruelest pieces of legislation in history. According to the Congressional Budget Office, the American Health Care Act would take coverage away from 23 million Americans, and send premiums soaring for millions more, especially older workers with relatively low incomes.

This bill is, as it should be, wildly unpopular. Nonetheless, Republican Senate leaders are now trying to ram through their own version of the A.H.C.A., one that, all reports suggest, will differ only in minor, cosmetic ways. And they’re trying to do it in total secrecy. . . . Clearly, the goal is to pass legislation that will have devastating effects on tens of millions of Americans without giving those expected to pass it, let alone the general public, any real chance to understand what they’re voting for.

Why this combination of secrecy and speed? Obviously, this legislation can’t survive sunlight — and I’m by no means the first to make the analogy with vampires.

When it comes to the Republican replacement for Obamacare, however, it’s not just the process that’s secretive; so is the purpose. . . . . the one obvious payoff to taking health care away from millions: a big tax cut for the wealthy.

So this isn’t a Trump story; it’s about the cynicism and corruption of the whole congressional G.O.P. Remember, it would take just a few conservatives with conscience — specifically, three Republican senators — to stop this outrage in its tracks. But right now, it looks as if those principled Republicans don’t exist.

The other element to all of this, of course, is the hypocrisy.  The GOP pretends to be the party of "Christian values" but there is NOTHING Christian about the party's reverse Robin Hood agenda of taking from the poor and middle class and giving the stolen wealth to the very rich./
Posted by Michael-in-Norfolk at Monday, June 19, 2017