Trump Makes an Ass of Himself at Annual Al Smith Fundraiser 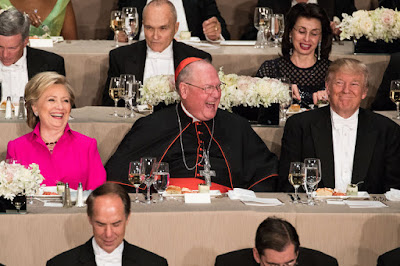 UPDATED:  An other article in the Times sums up Trump at the event:


It seemed clear to everyone else. Mr. Trump was being booed at a charity dinner.

As regular readers know, I do not hold the Roman Catholic Church in very high esteem even - or perhaps because - I am a former Catholic.   I hold New York Archbishop Timothy Dolan (a/k/a Porky Pig) in even lower esteem given his past actions prior to coming to New York to screw over victims of priestly sex abuse in his prior diocese.   That said, in New York City there is a long tradition of politicians attending the Al Smith Fundraiser to raise funds to benefit disadvantaged youth through Catholic outreach programs. Driving home from dinner with the husband and friends I happened to catch a portion of Donald Trump's and Hillary Clinton's remarks at the event.  Trump apparently failed to read the memo about being self- deprecation and being funny.  His comments for the most part brought no laughs and many boos, especially as he launched into Hillary Clinton.  In comparison, as has been the case in the presidential debates, Clinton showed herself to be a class act. The New York Times looks at the evening and Trump's leaden performance.  Here are highlights:

Hillary Clinton and Donald J. Trump appeared together Thursday night for a ritzy gathering, delivering remarks at the white-tie Al Smith charity dinner at the Waldorf Astoria in Manhattan.

In most presidential campaigns, the dinner, which benefits Roman Catholic charities, functions as a welcome respite, a forum for levity and self-deprecation in the throes of a heated election.

This year, it just so happens that two New Yorkers can also be found at the top of the ballot.

Here are the highlights:

• And so they came, in tails and fuchsia. The introduction of Melania Trump (sans pussybow), then Mrs. Clinton (to cheers and applause), then Mr. Trump (to slightly less effusive cheers, and scattered boos).

• Just like in the last two debates, Mrs. Clinton and Mr. Trump did not shake hands. Instead they beamed and ignored one another, until the evening’s M.C., Cardinal Timothy M. Dolan, the archbishop of New York, performed a veritable act of God — inserting himself between the two rivals, with no physical altercation.

• Alfred E. Smith IV, the chairman of the dinner, seemed to offer a preview of what may await Mr. Trump as he tries to return to New York society life should he not win the White House in November.

“Before the dinner started, Trump went to Hillary and asked how are you,” Mr. Smith said, setting up the punch line. “She said, ‘I’m fine — now get out of the ladies’ dressing room.’”

Finally, he turned the podium over to Mr. Trump. “No matter how the coin toss ended, our next speaker was going to say it was rigged,” Mr. Smith said, to laughter. “Donald, the microphone is yours and it’s working.”

“Last night I called Hillary ‘a nasty woman’” Mr. Trump said, reprising a line from Wednesday’s debate that many found sexist and offensive. “But this stuff is all relative. After listening to Hillary rattle on and on and on, I don’t think so badly of Rosie O’Donnell anymore. In fact, I’m actually starting to like Rosie a lot.”

• Mrs. Clinton began with the traditional self-deprecating joke: “I took a break from my rigorous nap schedule to be here.” The audience, she added, should be grateful: “Usually I charge a lot for speeches like this.”

• Mrs. Clinton later turned cutting, with a biting edge of hard truth.
“It’s amazing I’m up here after Donald,” she said. “I didn’t think he’d be O.K. with a peaceful transition of power.”

Then, she spoke of the Statue of Liberty, recounting how for most Americans, the green lady of freedom represents a shining beacon and welcome for immigrants arriving on the nation’s shores. But Mr. Trump, she added with a glint of steel, “sees the Statue of Liberty and sees a four.”

• The person who seemed to enjoy the evening least was Mr. Trump. He sat with his arms tightly folded as Mrs. Clinton spoke, a similarly taut smile across his face. But when Mrs. Clinton returned to one of his favorite themes — her health — he seemed momentarily buoyed.

Mr. Trump, the Democratic nominee said, had chivalrously sent a car to ferry her to the dinner. “Actually, it was a hearse,” Mrs. Clinton said.  And finally, Mr. Trump laughed with real joy.

I think I despise Trump more with every passing day.  As for his supporters, I am aghast at how they allow their racism and misogyny to cause them to support a vile individual like Trump.  I am beginning to believe that the belong in the same category as Christofascists: they should not be welcomed in sane and polite company.

Posted by Michael-in-Norfolk at Thursday, October 20, 2016