Is the GOP, the Party of Lincoln and Reagan Headed Toward Extinction? 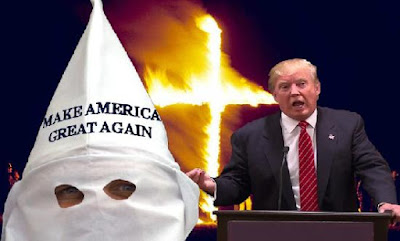 As a former Republican and GOP activist and City Committee member, I have often noted that I do not see how the GOP can be reformed and reeled back into sanity given the manner in which Christofascists, Tea Party loons and white supremacist were voted onto local committees across America.  There simply is no way that the so-called GOP establishment can kill the monster that it cynically created as it looked at short term opportunism with no eye toward the long term agenda. Now, the cancer has fully metastasized in the form of Donald trump and his core supporters.  Some believe that the GOP is now set on a course for extinction much as happened to the Whig Party in the mid 1800's.  A piece in the New York Times looks at this growing possibility.  Here are highlights:

Staunch in its opposition to the Democrats but rived by fierce internal schisms, the American political party stumbled toward defeat, its members cursing their fate. “We are slain,” cried Lewis D. Campbell, a representative from Ohio. “The party is dead, dead, dead!”

That was the election of 1852, when the Whig Party, then one of the country’s two major political forces, began to crumble over bitter arguments about slavery. The Whigs would dissolve within four years, to be reborn as the Republican Party — the very party now engulfed by its own civil war.

As this year’s extraordinary election hurtles toward its climax, scores of Republican leaders have deserted their party’s presidential nominee, Donald J. Trump. A snowballing scandal over sexual harassment and assault allegations has caused Mr. Trump’s poll numbers to crater, and some of the party’s top donors have suggested abandoning him altogether. But a solid core of rank-and-file Republicans stands defiantly with Mr. Trump, flocking to increasingly raucous rallies where the candidate vents his rage toward and disdain for a party that, at least theoretically, still backs him.

The turmoil raises a bracing possibility: Is an American political behemoth — a 162-year-old party that has produced 18 presidents, including Abraham Lincoln, Dwight D. Eisenhower and Ronald Reagan — about to fall apart like its predecessor?

“There is a real danger,” said William Kristol, the editor of The Weekly Standard, a conservative magazine, and an early critic of Mr. Trump. “But I wouldn’t panic yet. It’s very hard to know where we stand right now. A lot depends on the election in November.”

The Republican schism is in fact the culmination of simmering tensions within American conservatism. For years, the party has been an amalgam of factions: Christian evangelicals, free-marketeers, foreign policy hawks and more. The election of Barack Obama in 2008 helped spur the rise of a strongly conservative wing known as the Tea Party, with a brand of protest politics that fed off the anger of many white voters and created an opening for Mr. Trump this year.

Republican leaders have never been happy or comfortable with Mr. Trump . . . . But for months the leaders turned a blind eye to Mr. Trump’s verbal attacks on Muslims, Mexicans and women, hoping that even if he lost the presidential election, the party could retain its prime political asset: its majorities in the House of Representatives and the Senate.

Analysts predict that a crushing defeat for Mr. Trump could cost Republicans their advantage in the Senate and even their control of the House — a prospect that until recently was considered a distant possibility.

It is easy to forget that the Republican Party, now known as an anti-abortion and pro-gun stalwart, originated as the progressive face of American politics.

Founded in 1854 on a platform of opposition to slavery, the party was initially dominated by Northern states, which were more industrial.

In the years before and during the Civil War, the Democratic Party, which dominated the agrarian South, supported slavery. But the tables turned in the 1960s, when the Democratic Party championed an end to segregation and Southern states swung to the Republicans, increasingly the party of conservatism.

In the final weeks of the race, Mr. Trump’s scorched-earth campaign has exposed a yawning gulf between Republican leaders and much of the party’s base.

Some Republicans have had enough. At the party’s contentious national convention in July in Cleveland, I met Ryan Davenport, 25, a teacher from Dallas in a stars-and-stripes bow tie, who brimmed with fury at the ascension of Mr. Trump as the party’s standard-bearer. When I called Mr. Davenport last weekend, he said he had abandoned the party and would vote for Evan McMullin, a former C.I.A. operative who began a moonshot bid for the presidency as an anti-Trump independent.

Mr. Davenport said he took no pleasure in seeing the party he loved in disarray. But when fund-raisers for Mr. Trump called his house, he told them to leave him alone. “We have a predator running for president of the United States,” Mr. Davenport told me. “He’s radioactive.”

“Our views — the Republican intellectuals and think-tank people — differ from a significant chunk of the electorate,” said Avik Roy, a conservative strategist who likened Mr. Trump’s success to the rise of right-wing nationalist parties in Europe. “And it’s the electorate that decides.”

With several polling websites putting Mr. Trump’s chances of winning the election around 10 percent, he appears to be steeling for defeat, warning his supporters that the outcome of the election will be rigged. At a rally in Florida on Thursday, he struck an apocalyptic tone. “This is a struggle for the survival of our nation,” he said.  Or, at least, the survival of the Republican Party.

Posted by Michael-in-Norfolk at Tuesday, October 18, 2016