Will Republican Leaders Have the Balls to Kill Trump's "Rigged Election" Lies? 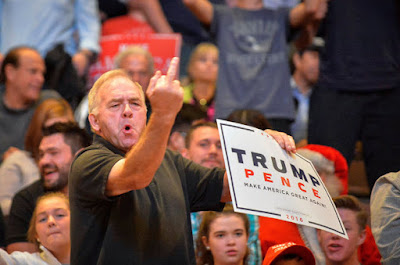 With two new polls out showing Donald trump losing the presidential election contest - one has him down by eleven points - it is a safe bet that Trump, a complete narcissistic egomaniac, will continue to lay the groundwork among his delusional supporters that he lost the election solely because it was "rigged" and stolen from him.  Frankly, I do not see Trump ever admitting that a majority of Americans rejected him and found him unfit - even though he is, in fact unfit for office.  Trump's ego will never allow him to make this admission.  Therefore, he may refuse to concede the election or find other ways to throw the nation's constitutional system into disorder (something his buddy, Vladimir Putin would savor).   Thus, the burden will fall on other Republican leaders - most of who have shown themselves to be spineless and little better than castrated eunuchs to date - to make the case that Trump lost fair and square and largely because of his own doing.  A piece in Politico looks at the issue and why many are worried.  Here are highlights:

No one knows how to handle what might be about to hit on Nov. 9.

Donald Trump is laying the groundwork to lose on Nov. 8, refuse to concede the election, and teeter the country into an unprecedented crisis of faith in government. Republicans and Democrats, in Washington and beyond, fear that the aftermath of the 2016 election will create a festering infection in the already deep and lasting wound that the campaign is leaving on America.

And, they say, only Republican leaders who speak up will have any chance of stopping it.

President Barack Obama, Hillary Clinton and their top aides, along with leaders on Capitol Hill, worry about the preview Trump is providing in this final month, part kamikaze mission to take down Clinton, part temper tantrum by a man who has never been embarrassed on either this scale or spotlight.

They worry about how his egged-on followers might respond, and the violence — perhaps against Muslims, Latinos or any of the many other groups he has targeted in his campaign rhetoric — that might follow.

If Clinton does win, most agree that the immediate burden will likely fall on Republican leaders — particularly House Speaker Paul Ryan and Senate Majority Leader Mitch McConnell — to quickly and vocally insist on the legitimacy of her election.

“What this would be is an assault on the foundations of the long-established traditions of the country, an assault on democracy, vandalizing it,” said Steve Schmidt, the Republican strategist who led John McCain’s 2008 campaign. “It would be incumbent finally on national leaders in the Republican Party to speak clearly, unequivocally about not just the situation, but the totality of it.”

“[I]f Donald Trump loses and fights the outcome, it will make many of his followers, which means millions of people, question the legitimacy of our American government. That’s destructive and corrosive.”

Tony Fratto, a former aide to George W. Bush, said, “You hate to have to fight something like this, but it is very corrosive, so you do have to fight it. You don’t want it to even pick up with a small segment of the population. Reince [Priebus, the Republican National Committee chairman] and Ryan and McConnell will have to concede for him, for the party. They just have to take things out of his hands.”

Trump’s refusing to concede “totally fits into his strategy of exploiting voters’ historic breakdown in faith in institutions across the board,” Israel said. “The problem is he'll make democracy itself collateral damage to his ego.”

“Democracies rely on some modicum of trust between people & their institutions. Destroy that thru conspiracy mongering & there's no going back,” tweeted Neera Tanden, a former Clinton aide who’s remained in touch with the campaign in Brooklyn.


A potential constitutional crisis all because of the insatiable, uncontrolled ego of one man.