Trump Has Exposed the Misogyny of the GOP 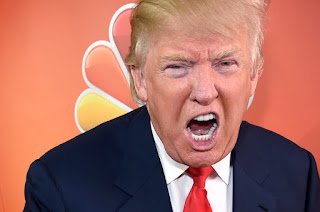 Note to new readers: I am a former Republican and served on the GOP City Committee for Virginia Beach for eight years. I resigned from the GOP because of what I saw as its growing extremism.

The Republican Party of my grandparents and even my late parents ceased to exist years ago, although its full descent into something hideous took longer to be fully revealed.  Thanks to Donald Trump, the GOP's full misogyny is on worldwide display.  The image of socially moderate "country club" Republicans has been replaced by swastika tattooed white supremacists and religious fanatics pushing for a form of Christian Sharia law.  One need only look at the 2016 GOP platform to see how radical the religious extremism has become.  Gays, of course, are a target of choice, but so too are others who reject the Christofascists' effort to bring back the 1950's.   A piece in New York Magazine looks at Trump's role in exposing just how horrible the Republican Party has now become.  Here are excerpts:

On Friday [a week ago], a video was leaked to David Fahrenthold at the WashingtonPost, revealing Donald Trump crudely bragging of nonconsensual sexual advances on women. On Saturday, in a sudden and dramatic cleaving of the Republican Party, leaders including Paul Ryan, Mitch McConnell, John McCain, and Trump’s running mate, Mike Pence, condemned Trump’s behavior, while others withdrew their endorsements and called on him to leave the race.

The grisly culmination came on Sunday night, with a stomach-turning press conference in which Trump presented Paula Jones, Juanita Broaddrick, and other women with complaints about Hillary Clinton related mostly to her husband’s sexual behavior, and then a debate at which Trump sniffed and paced his way around a stage angrily.

As for the video itself, Trump stuck with his talking point that there is nothing unusual in his language about women, emphasizing it as just “locker-room talk” — part of an ordinary, shared male view of women as sexual prey. . . . .If Donald Trump is going down, he seems determined to do so in a blaze of revelation, in which he forever ties his own outsize loutishness to the everyday misogyny of members of the party that nominated him. That may be the one public service he performs in this election.

Saturday’s yowls of disapproval from Republicans reeked of disingenuity and desperation.   Yes, the tape on which Trump is caught joking about grabbing women by the pussy seems to describe acts of sexual assault, but the language is not so far off from the scads of examples of Trump’s disparagement of women that everyone in his party has already heard.

Trump has repeatedly and energetically referred to women as pigs and dogs and pieces of ass, has rated them on a scale of one to ten, described those who breastfeed and pee and gain weight as “disgusting,” bragged about not changing diapers, and suggested that “putting a wife to work is a very dangerous thing.”

The worldview that Trump has affirmed over and over and over again, during decades in the public eye, is one in which women are show horses, sexual trophies, and baby machines, and, therefore, their agency, consent, and participation don’t matter. . . . . How can anyone be shocked that a man who calls women pieces of ass also talks about grabbing them by the pussy?

Republicans are not shocked; they’re scared. Donald Trump is losing and they are beginning to understand that his loss is going to expose them, not simply to partisan defeat, but as a party that has been covert in its cohesion around the very biases that he makes coarse and plain.

Which is worse: Threatening to grab someone by the pussy or forcing someone to carry and give birth to a baby that is the result of rape? Which is worse: Popping a Tic Tac in preparation for forced extramarital kissing with a stranger or actively discouraging women’s full participation in the workforce? The answer is: None of these is worse; they are all of a kind. The view of women as yours to control via political power, star power, or simply patriarchal power, is what Republicans — not just Trump, but lots of Republicans — have been doing for years.

In other words, the party’s policies are built on the same frame that Trump’s words and personal actions are: a fundamental lack of recognition of women as full human beings. If you doubt it, look no further than the words these guys used in their theatrical disavowals of Trump this weekend. “Women are to be championed and revered,” said Ryan, making women sound like quailing damsels or icy goddesses, but not actual humans. . . . Here is their apprehension of women: They are discernible as worthy of respect only as extensions of male identity — as wives, daughters, their recognizable subsidiaries.

Somehow, the disapproving ire of his Republican allies wasn’t so harsh when Trump was building his political career on the fundamentally racist lie of Obama birtherism, or threatening to ban Muslims, or calling Mexicans rapists, or describing immigrants as especially criminal, or even when he went on a tear about the weight gain of former Miss Universe Alicia Machado. At Slate, Jamelle Bouie argues that the pussy tape was the final straw because its object was a Republican constituency, white women. . . . there it was: the giant Republican lie about an interest in gender equality exposed as pure snake oil by their front man.

Most disturbing, the voters in his base don’t seem to care. Trump’s voters, some of whom wear “Trump that Bitch!” and “Hillary Sucks But Not Like Monica!” T-shirts, some of whom shout racist epithets about Barack Obama and Muslims and Mexicans, and some of whom march in parades with Hillary-in-a-coffin floats, still like Donald Trump. Paul Ryan, who after months of tacitly endorsing Trump’s racism and sexism by failing to truly distance himself from it, at last made an aggressive move by disinviting Trump from a Wisconsin rally where they were to appear together.  . . . was heckled by the crowd, some of whom shouted “Trump! Trump! Trump!” Republicans’ efforts to disentangle themselves from the monster they created have revealed a base that is deeply invested in that monster.

The press conference Trump held before the debate was soul-scorching, a cartoonish vision of what it means, in the mind of a misogynist and his vindictive fans, to punish the woman who’s beating you: by sexualizing her, humiliating her. . . . saying the worst thing he can imagine saying about a woman — that she failed to hold her husband’s sexual attention.

This is what was on display these last 72 hours: hate. The hate for the other that emanates from his scowling face and undergirds his words, and that has thrummed lightly beneath Republican policy goals for some time, now exposed for the world to see. Trump is channeling the hate of his supporters, inspiring hate in his detractors. This weekend, Donald Trump made America hate again.