The GOP is Past the Point of No Return 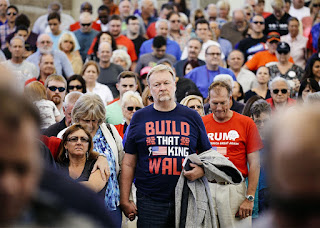 As noted in numerous posts, I believe that the Republican Party is beyond the point of no return.  The cancer of Christofascists, white nativists, and outright open racists within the party - and its local city/county committee base - has metastasized to a point where there is no realistic possibility of reform.   The GOP faces either a slow and agonizing death or perhaps a massive flame out in the wake of what will be a historic defeat for Donald Trump and, with luck, many down ticket Republicans.  A piece in Slate looks at the spectacle of the death of a major political party.  Here are highlights:

For most of the now almost-forgotten vice presidential debate, Indiana Gov. Mike Pence kept his cool, ignoring, deflecting, or outright denying any effort by Virginia Sen. Tim Kaine to tie him to his running mate, Donald Trump. But it’s hard to keep your composure for the length of a debate. It takes work. And toward the end of the 90-minute showdown, Pence began to falter, and then with a single infelicitous phrase he evoked the only wall Trump will ever build: the one between the Republican Party and Latino voters.It happened after Kaine returned to Trump’s rhetoric, pressing Pence to answer for his running mate’s insults and bigotry. “When Donald Trump says women or Mexicans are rapists and criminals … or John McCain is not a hero, he is showing you who he is,” said the Virginia senator, to which Pence had a reply. “Senator,” he said, “you’ve whipped out that Mexican thing again.” Adding, “There are criminal aliens in this country, Tim, who have come into this country illegally who are perpetrating violence and taking American lives.”That Mexican thing. That Mexican thing, to be precise, is Trump’s anti-Hispanic demagoguery, which stretches back to the beginning of the campaign. . . . They’re bringing drugs. They’re bringing crime. They’re rapists. And some, I assume, are good people.”Hispanic voters, who see Trump as an unacceptable risk. This is no small thing. Political parties can make inroads with groups that disagree with them—that’s just persuasion. But it’s difficult, if not impossible, to make gains with groups that see you as a danger to their futures. By placing Donald Trump at the top of the ticket and indulging his nativism and xenophobia, the Republican Party has said with its actions that it doesn’t want Latinos in its tent. Republicans may thus end up estranged from another group of nonwhite voters. . . . . the GOP has shown itself hostile to the idea of a pluralistic, multiracial America with room and opportunity for Americans of all origins.
For Trump, Latino immigrants join Muslims and Syrian refugees as potential threats, fundamentally incompatible with American life. If they’re here, they have to be removed, and if they’re not here, they need to be kept out. In turn, for Latino Americans and their families, this makes Trump an existential threat to their lives and livelihoods. Only 21 percent of Latinos say the GOP cares about their community, and 70 percent say that Trump has made the Republican Party more hostile to them. . . . . Eighty-two percent of respondents agreed with the first statement, that Trump makes them fear for their families and their country.The repudiation of Goldwater [in 1964] would be the last step in a realignment of black Americans that had begun in the days of Franklin Roosevelt. From then on, the national Republican Party would struggle to crack double digits with black voters, despite the strength of traditional beliefs and practices among black communities, from religious practice to traditions of self-help and self-reliance. The reason was straightforward: Goldwater wasn’t just offensive; he articulated a vision of national life that would inevitably leave black Americans on the margins as second-class citizens, subject to the whims of segregationists and their allies. And if Goldwater didn’t see it, his explicitly anti-black allies did. Republican politics—is a white ideology. Unresponsive to the particular concerns of nonwhites—around issues of discrimination and racial inequality—it is a drive to preserve a status quo built around the political and economic dominance of white Americans. This is more explicit in the age of Donald Trump, but it’s always been true, from Goldwater to the present. The Great Recession supercharged anti-immigration—and anti-immigrant—sentiment among GOP voters, and Republican lawmakers followed along, passing restrictive new laws after the party swept statehouses in the 2010 midterm elections. Indeed, we saw an inkling of rising anti-Latino sentiment in 2009, when Obama’s nomination of Sonia Sotomayor to the Supreme Court was met with a wave of racist criticism. [V]oting and party affiliation are habits. Once set, they tend not to change. And looking forward from the present, there’s a real chance that Latino voting takes the same path as black voting, with routine and overwhelming support going to Democratic presidential candidates. Again, California gives us a glimpse of what this looks like. Following Republican Gov. Pete Wilson’s anti-immigrant crusades in the 1990s, Latino Californians moved decisively into the Democratic column. By the end of the last decade, the state was a Democratic stronghold, . . .
And for those Republicans who don’t want Trump or Trumpism? It may be too late. The thing about a lily-white Republican Party is that it doesn’t have the diversity it needs to resist white resentment and white rage. Republicans crossed a point of no return. Raw ethnonationalism is their future, even if they don’t want it.