In Debates, Clinton Showed Why She Should Be President 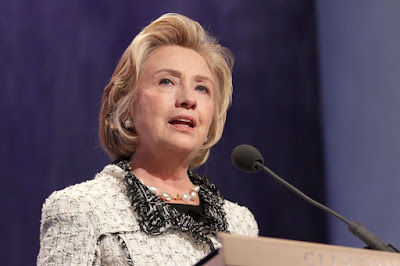 Many early on recognized Donald Trump as being spectacularly unfit for the office of President of the United States.  Despite all his boasting, his business record is a mess and the fact that American banks will not make loans to him and his organization - hence his need for Russian money - ought to underscore his unfitness.  And that doesn't even get to the issue of his frightening temperament and uncontrolled narcissism.  The man is a train wreck and only a Republican Party too far gone in the process of hijacking by racists and Christofascists (see the prior post) could have nominated a man so lacking in so many ways.  Had a decent candidate been nominated, Hillary Clinton would face a harder task to win the election.  That said, an editorial in the Washington Post argues why Hillary has proven herself worthy of the presidency.  Here are highlights:

IF PRESENT trends continue — and we emphasize “if” — Hillary Clinton will be elected president on Nov. 8, in an ironic conclusion to a political year that supposedly belonged to outsiders and populists such as Donald Trump and Sen. Bernie Sanders (I-Vt.).

Why has Ms. Clinton, the “establishment” alternative facing the voters, wound up in the lead at this late date? According to much conventional wisdom, she is the beneficiary of structural factors, such as voter demographics, and of good fortune — in the form of the Republican Party’s spectacularly irresponsible choice of an incompetent nominee.

Nevertheless, it is time to point out another reason Ms. Clinton is winning: She is earning it. She and her campaign have remained disciplined and even-keeled through tempests large and small — and through the tests of political communication and argument known as the presidential debates, both against Mr. Sanders and against Mr. Trump. It is not easy to stand on a stage for 90 minutes and parry words with an opponent, moderators and town-hall invitees; still less is it easy to do so while keeping one’s cool amid sleazy provocations and unpredictable insults from Mr. Trump. Through it all, Ms. Clinton has stayed focused on issues, laying out a program for the country that we don’t accept in every particular but that is well within the broad mainstream of plausible policy alternatives.

[S]he has kept her rhetoric civil and inclusive, in the face of an opponent bent on trashing the norms of democratic discourse. This is no mere style point. It is in a way substantive too, because this election has taken on importance beyond the already-high stakes for national policy; it has turned into a trial of our democratic culture. Certainly, Ms. Clinton has found ways to needle her opponent. But by preparing for the debates, using them to advance rational arguments and refraining from responding in kind to Mr. Trump’s lowest blows, Ms. Clinton has exemplified what’s still good about that culture. In fact, you might say she has reminded people of what’s good about “establishment” politicians . . . .

[W]e question the common assumption that any conventional Republican would be trouncing Ms. Clinton — especially because most of the Republicans usually cited were themselves trounced by the man now trailing the Democratic nominee. Ms. Clinton’s performance has apparently won her more appreciation from the electorate — a precious measure of political capital she will badly need if it does indeed fall to her to unite the country next year.