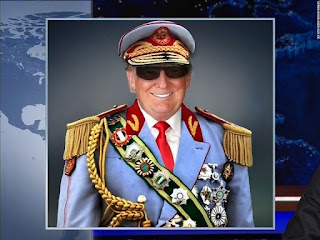 I for one have always seen Donald Trump as mentally ill.  Not so much in a "raving maniac" way, but rather a very sick narcissism and total lack of care or empathy for anyone but himself.  In seeking to satiate his unquenchable ego he engages in behavior that must be painful to his children, perhaps other than Donald Jr. who seems as sick as his father.  Now, as the election nears an end and Trump finds himself losing by most accounts, the man is lashing out and offering any and all excuses rather than taking a good look at himself in the mirror and understanding how unsavory and dangerous he appears to those tethered to objective reality.  Conservative columnist and former GOP white house staffer Michael Gerson has an op-ed that looks at Trump's increasing psychosis.  Here are excerpts:

Given even the lowest expectations, Donald Trump still has the capacity to surprise.

In recent days, Trump has sneered at the looks of a woman who accuses him of sexual assault, denigrated the appearance of Hillary Clinton, proposed to drug-test his opponent, used his campaign to promote what appears to be a Russian covert operation, asserted that Clinton has held secret meetings with international bankers “to plot the destruction of U.S. sovereignty,” attacked“Saturday Night Live,” promised to jail his opponent and contended that the “whole election is being rigged.”

Which means that Trump is sickeningly cruel, boorish, bonkers, subversive, conspiratorial, obsessive, authoritarian and reckless with the reputation of American democracy.

This is quite a closing argument for a presidential candidate. I imagine it did not emerge from focus groups. So what does all of this mean?

(1) It means that the Republican nominee for president is frighteningly unstable under pressure. He is easily baited, highly sensitive to slights, prone to using faulty information from the Internet, hyperbolic and vengeful. Now imagine those characteristics during a confrontation with China in the South China Sea.

(2) It is an indication of the quality of his closest, non-family advisers. Stephen Bannon and Rudy Giuliani are not attempting to keep Trump in check. They are feeding his manias. Trump is completely unmoored from restraining influences, and would be as president.

(3) Trump’s closing case is a version, not of movement conservatism or tea party conservatism, but of crackpot conservatism — an alt-right rage against a vast, scheming establishment that includes the liberal media, global financiers and a growing list of women making accusations of sexual assault. All this was previewed during Trump’s political rise, which included birtherism, vaccine denialism and insinuations of foul play in the death of Justice Antonin Scalia. GOP leaders can hardly pretend to be surprised  . . .

(4) It is a further indication (as if we needed it) that Trump has no commitment to the American political system. He is perfectly willing to delegitimize democratic institutions as a campaign tactic, squandering a civic inheritance he does not value. Even before his current troubles, he said that an electoral loss would be prima facie evidence of fraud and encouraged supporters to monitor majority-black polling stations in Pennsylvania. Now he is entering uncharted territory. By preemptively questioning the legitimacy of his forthcoming shellacking, Trump is stepping outside the four corners of the constitutional order, on the model of autocratic strongmen he has publicly admired.

The man is a clear and present danger and MUST be defeated on November 8, 2016, hopefully by a resounding margin which will underscore  his utter unfitness to have ever been the GOP nominee.  Hopefully he drags down GOP members of the Senate and House of Representatives with him.
Posted by Michael-in-Norfolk at Tuesday, October 18, 2016