Did Trump Just Sink the GOP? 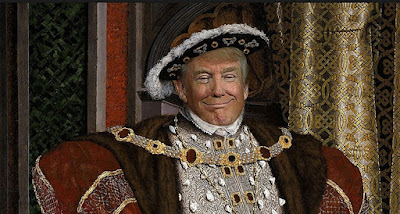 Making it clear that he holds American democracy and wants to "crown himself king" to quote one headline at Politico, many are saying that Donald Trump has increased the chances for an electoral catastrophe up and down the GOP ticket.  Frankly, I hope the prediction proves accurate and that the GOP suffers horrific defeats.  For decades now, the Republican Party has been a festering swamp of insanity and rejection of objective reality and facts.  Lead by the Christofascists who live in a fantasy world, science has been rejected as has all respect for science and knowledge.  Donald Trump is but one example of where the embrace of ignorance and bigotry has taken the GOP.  A piece in Politico looks at the initial reactions to Trump's devastating performance during last night's debate.  Here are excerpts:

Donald Trump’s rocky performance on the final debate stage did little to allay his party’s concerns that the GOP is headed for an electoral catastrophe up and down the ticket.

In interviews with over a dozen senior Republican strategists, not one said Trump did anything to change the trajectory of a contest that is growing further out of reach. And many said they were deeply distressed by Trump’s refusal to accept the results of the Nov. 8 election, an eyebrow-raising moment already dominating headlines.

With Trump’s prospects for securing 270 electoral votes growing dimmer by the day, many Republicans have turned their focus to the gritty, unpleasant task of protecting the party’s congressional majorities. Trump, they said, did little to buttress the GOP ticket — and may have worsened its position by repeating his claim that the election is rigged, something congressional Republicans are sure to be pressed on in the days to come.

Immediately after Trump’s remark, several party higher-ups, including South Carolina Sen. Lindsey Graham and Arizona Sen. Jeff Flake, took to Twitter to distance themselves from it.

“The biggest loser tonight was not Trump, the presidential race is over,” said Robert Blizzard, a GOP pollster who is working on a number of congressional races. “Instead, down-ticket Republicans lost tonight — they needed some help and got absolutely none.”

While many candidates have taken a hit since the release of the bombshell “Access Hollywood” tape, party operatives maintain that the bottom hasn’t completely fallen out and that a down-ballot landslide isn’t necessarily in the cards.

Yet many Republicans were eager to see Trump deliver a steady performance, something that would stabilize his poll numbers at a time when surveys show him losing ground in traditionally conservative states like Arizona, Georgia, and Utah.

Steve Schmidt, who guided John McCain’s 2008 presidential campaign, said that Trump’s refusal to commit to accepting election results would overshadow any other strong moments he had.

“It’s the one and only headline that matters coming out of the debate,” said Schmidt. “It’s absolutely unprecedented for any presidential candidate in the history of the country.”

To some, the performance represented what’s gone awry with the Trump campaign. After exhibiting moments of discipline early on, he squandered it later — with his remarks on the election, with his refusal to criticize Russian dictator Vladimir Putin, and with his comment that Hillary Clinton is a “nasty woman.”  That Trump would go so far as to criticize Ronald Reagan . . . on trade policy, left some Republicans aghast.

[T]he debate could have longer-term repercussions, potentially increasing the urgency with which down-ballot Republicans begin presenting themselves as a “check and balance” to a Clinton presidency. In doing so, they would all but concede that Trump is destined to fall short.

“Trump was already behind,” said Bill Kristol, a Trump critic and the editor-in-chief of the conservative publication The Weekly Standard. “He didn't help himself tonight, indeed he hurt himself. He's very likely to lose, and to lose badly. He'll drag the Senate and House down with him unless Senate and House candidates can make the case they're needed to check and balance Hillary.”

The moral?  Never nominate someone who is mentally ill to be your party's standard bearing.  The GOP deserves whatever catastrophes that may be the result of such irresponsible behavior and actions.
Posted by Michael-in-Norfolk at Thursday, October 20, 2016