Trump and the Rot at the Core of the "Religious Right" 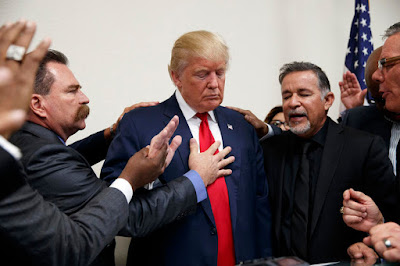 If nothing else, Donald Trump's presidential campaign has starkly revealed the moral bankruptcy of the falsely labeled "Religious Right."  Many of the movement's leaders have shown a total disregard for morality and the Gospel message has they have sworn fealty to Donald Trump in exchange for what they see as promises of power for themselves. As one who has followed disingenuously named "family values" organizations - many of which have now garnered a hate group designation from the Southern Poverty Law Center that monitors extremist groups - for close to two decades, none of this should come as a surprise.  Anti-abortion extremism and then anti-LGBT extremism (after abortion ceased to be a cash cow) has lined the pockets of organization leaders and allowed them to demand a seat at the table in Republican power maneuvers.  As for the so-called "good Christians," most have been as typically is the case far too quiet in condemning thier hate-filled and power hungry coreligionists.  A piece in the New York Times looks at how Trump has revealed such groups for the horrible entities that they are in fact.  Here are highlights:

Donald J. Trump had already roiled the religious right, casting the Republican Party’s most reliable voting bloc into an abyss of despair, recriminations and uncertainty about the future. Then the 2005 video surfaced of him boasting about his sexual predations and women began coming forward to accuse him of sexual assault.

“The world is getting a glimpse into the dark and rotting core of evangelicalism,” an evangelical with deep roots in the movement told me recently.

The divide — or, more aptly, the crater — between pro-Trump and anti-Trump evangelicals is a window into the future of the Republican Party. White evangelical voters are the heart of the party’s base, the loyal foot soldiers who turn out for the party’s presidential nominee every time. A poll by the Public Religion Research Institute taken in part after the video’s release shows 65 percent of white evangelicals intending to vote for Mr. Trump.

A defection by even 15 percent or 20 percent of Republican evangelicals from lock-step support for the party could be a major contributing factor to a collapse of the its national electoral viability. But that is just one measure of the splintering of this devoted voting bloc. The movement is also being subjected to a very public display of division between the pro- and anti-Trump camps and open talk among evangelicals about pro-Trump leaders’ plummeting credibility.

The Monday after America heard Mr. Trump’s vulgar boasting, Ralph Reed, the political strategist thought to have a genius for turning out evangelical voters, delivered a full-throated defense of why Christians should vote for the nominee to students at Liberty University. That same day, Mark DeMoss, a highly regarded Christian public relations professional who, in the 1980s, was the chief of staff to Liberty’s founder, Jerry Falwell Sr., told me, “The evangelical movement has, in my view, forfeited any future moral authority in American public life.” Mr. DeMoss, himself a Liberty alumnus, was asked to resign from the university board’s executive committee in February after he was publicly critical of the endorsement of Mr. Trump by Liberty’s president, Jerry Falwell Jr.

Yet the reaction of a group of Liberty students provided another data point in the unfolding evangelical power collapse. The students released a letter declaring that Mr. Trump “is absolutely opposed to what we believe, and does not have our support.”

Although its leaders may not admit it, the political apparatus of the religious right that has persisted in supporting Mr. Trump’s candidacy is driven by a quest to retain a seat at a potential Republican White House table.

But capitulating to Mr. Trump has stripped those leaders of their leverage. In previous elections, they vetted the candidates, dangling the indispensable evangelical vote in exchange for promises about Supreme Court justices and dedication to “Christian values.” Mr. Trump reversed that dynamic. . . . . His most Trumpian promise is his pledge to repeal the Johnson Amendment, a rarely enforced law that bars houses of worship and other nonprofit groups from using tax-exempt resources to endorse political candidates.

“It will take a long time,” Jerushah Armfield, an evangelical writer and the granddaughter of the iconic evangelist Billy Graham, told me, “for evangelicals to redeem their moral credibility — if they even can.”

There remains one thing that could still unite conservative evangelicals: a Hillary Clinton presidency. It’s still entirely foreseeable that the religious right, along with other pro-Trump partisans, would fight Mrs. Clinton’s legislative agenda, her Supreme Court nominees and even the legitimacy of her election.

By hitching their wagon to Mr. Trump, religious-right leaders are also tying their fortunes to the alt-right, the predominant movement supportive of, and bolstered by, the Trump campaign. As a largely secular movement, though, the alt-right not only is uninterested in the religious right’s concerns, it also threatens to eclipse the religious right within the Republican Party. And it’s a movement simmering with racism, xenophobia and anti-Semitism.

The moral authority of evangelical Christians was always misplaced and stemmed, in my view, from undeserved deference on the part of most of the media.  The ugly truth has been there for decades if one bothered to look for it.  Here in Virginia, The Family Foundation continues to be the puppeteer of the Virginia GOP as it pushes its agenda of hate, bigotry, and false piety.
Posted by Michael-in-Norfolk at Wednesday, October 19, 2016