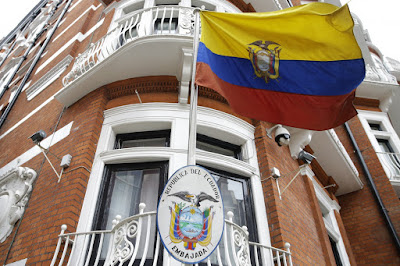 Candidly, I will never understand what motivated Ecuador to grant Julian Assnage asylum in its embassy in London.  The man is after all up on rape charges in his home country of Sweden.  If innocent as claimed, he needs to return and face trial and acquittal.  Putting that issue aside, Ecuador seems to have had enough of Assange's efforts working with the Russian government and Russian military intelligence services to disrupt America's presidential election and has cut off Assange's Internet access and crippled Wikileaks' ability to aid Donald Trump and Vladimir Putin's efforts to undermine American democracy.  A piece in the Washington Post looks at Ecuador's long over due action.  Here are excerpts:

A foreign ministry statement said that while it stands by its decision in 2012 to grant Assange asylum, it doesn’t interfere in foreign elections. Leftist President Rafael Correa’s government said it was acting on its own and not ceding to foreign pressures.

The ministry didn’t specify the extent of the restrictions on Assange’s access to the internet, saying only that the limitations wouldn’t affect WikiLeaks’ ability to carry out its journalistic activities.

The announcement confirmed Wikileaks’ claim that Ecuador was behind the cut-off but disputed its assertion that the decision was made because of U.S. pressure.

The State Department denied the allegation.

“While our concerns about Wikileaks are longstanding, any suggestion that Secretary Kerry or the State Department were involved in shutting down Wikileaks is false,” U.S. State Department spokesman John Kirby said in an email. Speaking to reporters later, deputy spokesman Mark Toner said Kerry never even raised the issue or met with Correa during his visit to Colombia.

Assange has been holed up at the modest embassy suite at No. 3 Hans Crescent for more than four years after skipping bail to avoid extradition to Sweden over sex crimes allegations, a position which — until now — hasn’t prevented him from continuing to play a pivotal role in exposing state secrets and backroom trade deals.

Assange fled to the Ecuadorean Embassy on June 19, 2012, after a drawn-out and ultimately unsuccessful legal battle to being sent to Sweden, where he remains wanted over an allegation of rape. Ecuador granted him asylum, but British authorities have made clear they would arrest him if he tried to leave. London’s Metropolitan Police used to maintain a visible presence outside the building, although officers were nowhere in sight when an AP journalist visited on Tuesday.

Marc Becker, a professor of Latin American history at Truman State University in Missouri, said that while Clinton had successfully pulled Correa into her orbit during her tenure as secretary of state, he doubted Ecuador had merely bowed to U.S. pressure. He ventured that Correa’s government opposes the idea of interfering in another country’s affairs “and doesn’t appreciate their guests using their resources to that end.”


Ecuador needs to boot Assange from its embassy and allow him to face trial in Sweden.

Posted by Michael-in-Norfolk at Wednesday, October 19, 2016