Economists: A Trump Win Would Tank the Financial Markets 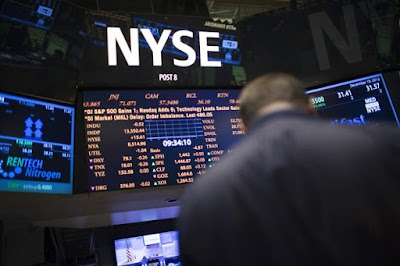 As some - who in my opinion are delusional - continue to claim that Donald Trump is a good businessman, there's one test that they utterly ignore: Trump's numerous bankruptcies and the fact that no American bank will make a loan to him and/or his entities. Trump has gamed the system, screwed over lenders and bond holders and other investors with abandon, always making sure that he flees the sinking ship, saving himself as others perish financially.  It's as if he were Sir Cosmo Duff-Gordon leaving the Titanic in a lifeboat with only 12 people in it, he and his wife's luggage included, leaving dozens to die who might have lived had the lifeboat been even remotely filled to capacity. The financial markets and bankers know Trump well, and economists predict that should he somehow win, the world's financial markets will tank, wiping out Americans' savings, IRA's and retirement funds.  A piece in Politico looks at the likely wreckage.   Here are highlights:

NEW YORK — Wall Street is set up for a major crash if Donald Trump shocks the world on Election Day and wins the White House.

New research out on Friday suggests that financial markets strongly prefer a Hillary Clinton presidency and could react with panicked selling should Trump defy the polls and deliver a shocking upset on Nov. 8.

“Wall Street clearly prefers a Clinton win certainly from the prospective of equity prices,” said Dartmouth College’s Eric Zitzewitz, one of the authors of the new study along with the University of Michigan’s Justin Wolfers. “You saw Clinton win the first debate and her odds jumped and stocks moved right along with it. Should Trump somehow manage to win you could see major Brexit-style selling.”

Stock prices around the world tanked over the summer when British voters surprised pundits and voted in favor of pulling the country out of the European Union. Trump himself now talks about his own upset prospects as “another Brexit.”

The report also shows where investors around the world are making big money on the 2016 campaign. Traders betting on the Mexican peso to take a beating under a President Trump, who has promised a trade crackdown, have lost big following debates in which Clinton did well.

The Trump effect also shows up for traders betting on market volatility. Futures contracts for the VIX index, which tracks market volatility, fell sharply during the first debate, suggesting investors expect much less volatility under a Clinton White House than a Trump White House.

Oil prices rose during the first debate and gold fell. Gold tends to be a safe haven when investors are worried about possible economic and financial instability. And oil tends to go up when investors expect stronger economic growth and more demand for energy.

Michael Obuchowski of Merlin Asset Management has watched every move in the campaign closely— including all the WikiLeaks email dumps on Clinton — and made two calls based on it: that Clinton will win and that she won’t go as far left as some investors initially feared.

“I always assumed Trump would eventually collapse so that meant staying in equities and going away from certain high-dividend stocks assuming Clinton is going to win and try and tax those dividends at a higher rate,” he said.

The new report suggests that the stock market is worth 11 percent more under a Clinton presidency than a Trump presidency. This is a highly unusual circumstance because markets historically prefer Republican policies on taxes, regulation and trade to those of Democrats. . . . . Current market action is the direct reverse of what happened in 2012 when President Barack Obama was running for reelection against former Massachusetts Gov. Mitt Romney.

Investors now clearly back a Clinton presidency and by a large margin.

“All told, these movements suggest that financial markets expect a generally healthier domestic and international economy under a President Clinton than under a President Trump,” Wolfers and Zitzewitz write in their new paper.

This also suggests that a shock Trump victory next month could crush stock prices, perhaps by as much as 10 percent, and send the peso and other currencies sharply lower while ushering in a period of intense market volatility as investors try and discern how Trump would govern and whether he would make good on his pledge to start trade wars with Mexico and China and deport 11 million current undocumented immigrants.

“You would see incredible pressure on stock prices if Trump wins and everyone flooding into rare metals like gold and into bonds” in the U.S., Germany and the United Kingdom, said Erik Jones, professor at the Johns Hopkins University School of Advanced International Studies.

Overall, the authors of the new paper envision a massive global market shock should Trump win. “Given the magnitude of the price movements, we estimate that market participants believe that a Trump victory would reduce the value of the S&P 500, the UK, and Asian stock markets by 10-15%,” they write and “would reduce the oil price by $4, would lead to a 25% decline in the Mexican Peso, and would significantly increase expected future stock market volatility.”

Bottom line?  By supporting Trump, many of his followers will be voting against their own financial best interest, falling once again to the GOP ploy of suckering them in by calls to their racism and xenophobia.
Posted by Michael-in-Norfolk at Saturday, October 22, 2016