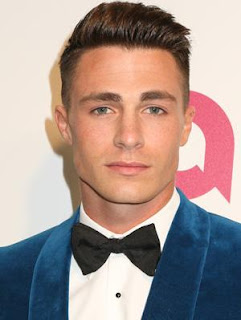 Previous post on this blog have looked at Colton Haynes' past flirtations with gay modeling and his suggestion more recently that he might actually be gay.  Now, Haynes has made it official and confirmed that, yes, he is gay, and that he has been "out" to family and friends for some time.  I congratulate Haynes on finally making it official.  Having first lived in the closet for decades myself and then lived in the closet at work, words truly do not describe the weight one feels lifted from them once the hiding and secrecy are needed no more.  I wish Haynes happiness as he now lives an authentic life.  One of his comments that I touched a cord with me - he talked about having to act 24/7.  I described my years in the closet as living as "an actor on a stage."   Interesting that an actor would use the same analogy.  Here are highlights from an interview article in Entertainment Weekly:

If you don’t know Colton Haynes by name – and he’d be the first person to bashfully tell you, you probably don’t – you at least know the 27-year-old actor by his familiar Hollywood fable: farm boy turned New York model turned aspiring Los Angeles actor, a paragon of the digital age of the Instagrammable hunk, a slab of innocent Kansas marble sculpted by MTV and polished by The CW.


He’s a teen heartthrob and a fast-rising one at that, thanks to two major roles: His life-changing debut in 2011 as slithering jock Jackson Whittemore on MTV’s runaway hit Teen Wolf, and his series regular gig on The CW’s Arrow as hooded vigilante Arsenal. Both roles made him digital teen royalty, bolstered by Haynes’ decided effort to embrace and interact with fans and his eccentric social media savviness (somewhere to the tune of some 4-million Instagram followers).


So why, then, would a rising prince of teen genre walk away from two red-hot TV gigs – arguably at their own peaks, and on the cusp of his own – and all but abdicate the throne?

“I asked to step away because I cared more about my mental and physical health than my career at the time,” the actor tells EW, opening up about his personal and professional life for the first time in quite some time. “I’ve had terminal anxiety my entire life. Physically ill, fainting. I’m 27 years old, and I have an ulcer. I had to step back.” Clinical anxiety and public pressure are a potent mix, but their effects may be worse for someone like Haynes – a gentle spirit in a threatening (or so he’s been told by many a casting director) build, someone who lost control of his own personal narrative somewhere along the way between Kansas and California.

Social media afforded a temporary way to maintain his public voice after his departure from Arrow in 2015, . . . But while social media has helped his career, it’s also gotten him into some trouble. Case in point: A Tumblr post in January sparked an Internet firestorm after a fan commented on Haynes’ “secret gay past,”regarding racy modeling photos Haynes took while underage. Without giving it much thought, Haynes offered a coy reply: “Was it a secret?” The comment was picked up by bloggers as his coming out – but it wasn’t. Not yet.

“It was a complete shock. I wasn’t ready to be back in the headlines,” says Haynes, who is in fact gay but has never publicly addressed his sexuality (and, like many others on his path, took advice early in his career to subdue it). “I should have made a comment or a statement, but I just wasn’t ready. I didn’t feel like I owed anyone anything. I think in due time, everyone has to make those decisions when they’re ready, and I wasn’t yet. . . . .  He had checked into rehab for anxiety and would be frequently back in the hospital over the next three months.

“People want you to be that GQ image that you put out, but people don’t realize what it’s like to act 24 hours a day. I’d go home and I was still acting,” he says gently. “People who are so judgmental about those who are gay or different don’t realize that acting 24 hours a day is the most exhausting thing in the world.” The truth is, Haynes has been out for most of his life – in high school, to his family and friends, to his cast members, to his Hollywood bosses (like Arrow creator Greg Berlanti, now one of his closest mentors). But as a green transplant in Hollywood in 2006, he wasn’t any more immune to the town’s well-chronicled discomfort with LGBT identity.

Now, however, there’s a palpable energy around him, a positivity that gushes from a 27-year-old eager to start not just a new chapter, but perhaps a new book. He’s setting his eye on movies, on comedy, on theater and photography and music – all passions he’s keen to explore as a version nothing less than himself.
If his cyber clash with his own identity earlier this year forced him to take stock of his life, its after-effects are now on the positive upswing. “It took me so long to get to this point, but I’m doing so good,” says Haynes. “I’m happier than I’ve ever been, and healthier than I’ve ever been, and that’s what I care about.”

No one should have to live in the closet like an actor 24/7 - especially when the need to do so stems solely from religious based ignorance and bigotry and the refusal of many, especially evangelical Christians, to move into the modern world and let go of brainwashing they received as children.  Again, kudos to Colton Haynes.
Posted by Michael-in-Norfolk at Thursday, May 05, 2016