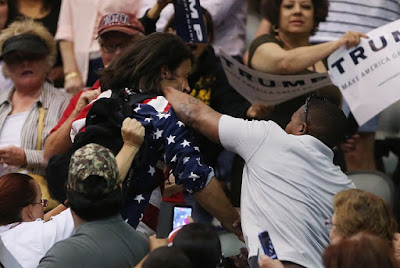 I have at times compared Donald Trump's supporters to the thugs that rallied to support of Adolph Hitler in the early 1930's.  Now, a survey has confirmed that when it comes to being threatening and aggressive, Trump's supporters are indeed prone to threats and would be violence (as a side note, in California, Bernie Sanders supporters shut down a rally for Hillary Clinton by emulating the behavior of Trump supporters).  America has for years been notable for the lack of violence on the election front, but now demagogues on the right and left are stirring their followers to make the nation look like some third world country).  Politico looks at the survey findings.  Here are excerpts from the article:

Donald Trump’s supporters are viewed as the most aggressive or threatening online, a new survey as found found.

The survey, conducted by the RAD Campaign, Lincoln Park Strategies, and Craiglist founder’s Craig Newmark’s initiative craigconnects, found that 57 percent of those surveyed said that Trump supporters are “very aggressive and/or threatening online”.

The issue of a candidate’s online supporters has come to the forefront in this election cycle, as supporters for both Bernie Sanders and Trump have come under the spotlight for their aggressive behavior.

And though Trump said this week he doesn’t "have a message for the fans” who send anti-semitic threats online, the survey found 54 percent of respondents think presidential campaigns should take more of a stand against the aggressive behavior of their supporters.

"We were noticing … a rise in aggression and hostility (online), so we wanted to find out if that was just happening in small, politically engaged circles or was that happening across America."