Electing Hillary and the Importance of Filling the Supreme Court 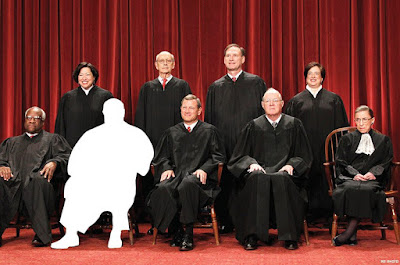 A piece in The Advocate looks at an issue that ought to wake up Bernie Sanders supporters from their impossible dream: the desperate need to put a Democrat in the White House in November and the potential horrific consequences if Donald Trump - who has condemned the Obergefell ruling - were to be the one making nominations to the Court. Sanders may be endangering progressive causes for a generation if he allows his ego to over rule pragmatic, common sense thinking that may save the nation, and certainly LGBT citizens from the disaster of Trump appointments to the Court.   Here are some article highlights that ought to make Sanders supporters to awake from their dreams:

The post-Scalia court will likely confront a host of legal questions important to the LGBT community, from antigay “religious liberty” and employment discrimination to trans rights and bathroom access. It is not at all clear that the champion of marriage equality, Justice Anthony Kennedy, will again side with the liberals on these knotty issues. And it therefore seems quite likely that Scalia’s successor will hold the key to LGBT equality on a divided court.

Given Kennedy’s famously sentimental marriage-equality opinion, the justice is often presumed to be a reliable vote in favor of gay rights against discrimination. But Kennedy has several competing passions — one of which is a near-absolute belief in a constitutional right to free association. In one especially regrettable 2000 decision, Boy Scouts of America v. Dale, Kennedy joined an opinion holding that the Boy Scouts have a First Amendment right to exclude gays from their group. Allowing gays to join, a slim majority of the court held, would “force the organization to send a message, both to the youth members and the world, that the Boy Scouts accepts homosexual conduct as a legitimate form of behavior.” Thus, the group was constitutionally exempt from LGBT nondiscrimination laws.

Kennedy’s willingness to join the Boy Scouts opinion has deeply troubling implications for the series of antigay “religious liberty” cases making their way toward the court’s docket. These cases typically involve businesses (such as photographers and florists) who refuse to serve same-sex couples on account of their religion, often couching their refusals in the language of free-speech and free-association claims. The antigay business owners who turn away gays insist that the First Amendment protects their right not to associate with gay couples; doing so, they assert, would express a message that they approve of same-sex relationships.

This argument is cleverly crafted to capture Kennedy’s heart. The key difference between the Boy Scouts case and the “religious liberty” cases is the distinction between a private organization and a business. But the constitutional importance of this distinction can easily be waved away if one buys into the idea that merely associating with a gay person sends a message of tolerance — as Kennedy clearly does. Moreover, Kennedy provided the fifth vote for Hobby Lobby, a decision that vastly expanded private, for-profit corporations’ right to discriminate on religious grounds. With Scalia gone, the Hobby Lobby majority is now a man down; the justice’s replacement could reverse that case’s license to discriminate — or extend it to antigay businesses.

Gay and trans Americans have another Supreme Court showdown on the horizon. Title VII of the Civil Rights Act of 1964 bans employment discrimination “because of sex.” . . . . the Equal Employment Opportunity Commission has ruled that Title VII also proscribes anti-trans discrimination and antigay discrimination. Anti-trans discrimination, the agency held, is inherently based in sex stereotyping about women’s femininity and men’s masculinity; distaste for an individual’s gender identity is, by definition, a sex-based judgment call. Homophobia is similarly sexist, according to the EEOC:

But EEOC is just a federal agency, with no actual power over federal judges. Some federal courts have accepted these EEOC rulings; some have rejected them; none are bound by them — until the Supreme Court signs off, which it has not yet done. LGBT advocates have long been nervous that Kennedy will reject the EEOC’s comprehensive definition of sex discrimination and sex stereotyping. . . . . Once again, Scalia’s replacement may tip the balance one way or the other.

A constitutional challenge to North Carolina’s vicious new anti-LGBT law, which nullifies local LGBT rights ordinances and bars trans people from using many public bathrooms, centers its analysis on Romer. As well it should: Romer’s basic rule — that laws motivated by animus toward a single group are constitutionally invalid — would seem to obviously implicate bathroom bills. With no evidence that trans people pose a threat in bathrooms, the anti-trans animus driving these bills is essentially undeniable. Legislatures simply want to disadvantage trans people because they don’t like them. And if Romer means anything at all, it means the government doesn’t get to do that.

Which side of Kennedy will trans activists face? The compassionate author of Romer or the sexist traditionalist? With any luck, trans people’s rights won’t hinge on this question: A Democratic appointee to the high court is almost certain to side with equality over intolerance. Indeed, that justice may well hold the critical vote in the next round of LGBT cases.

Let’s hope he or she makes it onto the bench in time to ensure that Obergefell was just the beginning of a new era of LGBT constitutional equality.