Being Trump's VP Choice - Like Buying a Ticket on the Titanic? 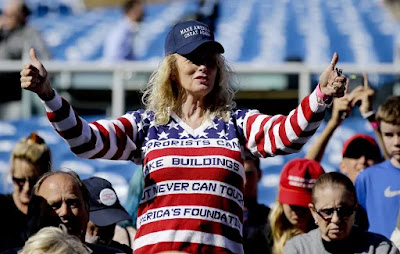 For the better part of three decades or more the Republican Party has coddled, pandered to and embraced Christian extremists and those most motivated by hatred of others being it based on race, national origin, or sexual orientation.  The goal?  Short term election victories based on voters motivated by animus towards others.  Yet now, the so-called GOP establishment continues to display revulsion toward the natural outcome of the seeds that it sowed: Donald Trump.  In a column in the New York Times George Will - who seems to be becoming a slightly milder version of Pat Buchanan - is urging Republicans to do all they can to keep Trump out of the White House while striving to minimize the potential down ticket carnage he and others fear Trump would bring in November. Indeed, Will even speculated on who would be the best VP choice for Hillary Clinton to insure a Trump defeat (he likes Senator Sherrod Brown of Ohio).

Now, a piece in the Times looks at the manner in which many in the GOP are fleeing from the prospect of being Trump's vice presidential running mate - something Senator Lindsey Graham equates to "buying a ticket on the Titanic."  Will in his column states that any Trump VP choice will be inherently unqualified because no one qualified would want the position and electoral doom.  Perhaps I am too much the cynic, but I am finding great pleasure in seeing the GOP reap the whirlwind of its own creation.  Here are highlights from the New York Times piece:

It’s a time-honored tradition for politicians to deny any interest in the vice presidency. But this year, with the possibility of Donald J. Trump as the Republican nominee, they really mean it.

“Never,” said Chris Schrimpf, a spokesman for Gov. John Kasich of Ohio, who is still running against Mr. Trump. “No chance.”

Or, as Senator Lindsey Graham put it, “That’s like buying a ticket on the Titanic.”

A remarkable range of leading Republicans, including Gov. Nikki Haley of South Carolina and Senator Jeff Flake of Arizona, have been emphatic publicly or with their advisers and allies that they do not want to be considered as Mr. Trump’s running mate. The recoiling amounts to a rare rebuke for a front-runner: Politicians usually signal that they are not interested politely through back channels, or submit to the selection process, if only to burnish their national profiles.

But Mr. Trump has a singular track record of picking fights with obvious potential running mates like Senator Marco Rubio of Florida, who has indicated a lack of interest in the vice presidency generally and has yet to reconcile with Mr. Trump publicly. Ms. Haley and another potential pick, Gov. Susana Martinez of New Mexico, have sharply criticized Mr. Trump at recent party gatherings and do not want to be associated with his sometimes-angry tone, according to advisers and close associates who have spoken with these Republicans.

Several Republican consultants said their clients were concerned that Mr. Trump’s unusually high unfavorable ratings with all voters and his unpopularity among women and Hispanics could doom him as a general election candidate and damage their own future political prospects if they were on his ticket.

A cross section of leading Republicans agree that his most sensible choice would be an experienced female governor or senator, given that he would most likely face Hillary Clinton in November and need support from a majority of white women to offset her strong support among blacks and Hispanics. Yet Mrs. Clinton is currently ahead of Mr. Trump with white women by double-digit percentages, according to a recent CBS poll.

The pool of Republican women in major offices is relatively small, and Mr. Trump has already alienated some of them. Governor Haley denounced him for not quickly disavowing support from the former Ku Klux Klan leader David Duke, and Governor Martinez has criticized his remarks about Hispanics.