Putin Took Credit for the Boom. Now There’s a Bust. 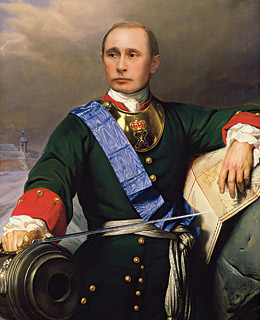 As noted many times, Russia has been plagued throughout the centuries with a curse: failed leaders who have put personal ambition and/or ideology ahead of the best interests of the Russian people.  This curse continues to persist under Vladimir Putin who sees himself as a new tsar and who, with his cronies, has raped the Russian economy of assets.   Now, with oil prices falling and economic sanctions for his illegal invasions of Crimea and parts of Ukraine also taking a toll, the question is whether or not the Russian people will rightly blame Putin's years of mismanagement for their plight.  The answer to this question is still out, but some Russians seem to be finally opening their eyes and not being duped by Putin's foreign adventures and anti-gay efforts that were always meant to be a distraction from his failed leadership on the economic front.  Here are highlights from a piece in the New York Times:

Today, the economic troubles that Mr. Putin came here to make a big show of solving are back, only worse and involving far more intractable problems than just the “trivial greed” of tycoons that Mr. Putin blamed for Pikalevo’s tumult in 2009.

Pikalevo, about three hours east of St. Petersburg, and the rest of Russia are now mired in the country’s longest recession since Mr. Putin came to power at the end of 1999, with the World Bank warning last month that the nation’s poverty rate would increase this year to 14.2 percent of the population, “undoing nearly a decade’s worth of gains.”

Russia’s current crisis, though largely caused by market forces beyond the Kremlin’s control, notably a slump in the prices of oil and gas, has pushed Mr. Putin into a corner. After years of taking credit for a booming economy, which also had little to do with his actions, and casting himself as a can-do leader capable of untying the toughest economic and political knots, he faces a crisis that has exposed the stark limits of his power and prowess.

A recent rebound in oil prices has lifted hopes in the Kremlin that the worst of Russia’s economic storm has passed, but it has also highlighted just how much Mr. Putin’s fortunes depend on unpredictable and uncontrollable outside forces like the energy market or the economic sanctions imposed by Europe and the United States.

[T]hroughout his 16 years in power, whether as president or prime minister, Mr. Putin has presented an image of an omniscient and omnipresent leader interested in and capable of addressing his country’s most microscopic concerns.

[C]ost-cutting maneuvers, which keep workers off the unemployment register but in some cases reduce their income to almost nothing, are increasingly popular with Russian businesses hit hard by the downturn. But they are deeply unpopular with a population that had grown accustomed to rising salaries under Mr. Putin.

The downturn seems to be taking a toll on Mr. Putin’s standing, or at least on faith in his policies, as Russians’ fascination and delight with his foreign ventures wanes and pocketbook issues increasingly dominate public worries. Around half of those polled this year by the independent Levada Center said they thought Russia was moving in the “right direction,” compared with 64 percent last summer.

[T]he Kremlin’s current nightmare: With low global energy prices and Western sanctions over the Ukraine conflict crimping Russia’s prospects of recovery, the economy has hit a wall. It simply cannot compete with China, the United States or even the European nations that Russian state media constantly portray as fading has-beens. The easy and popular fixes the Kremlin used in the past to resuscitate the economy — or at least to placate the public — have all been exhausted.

There are few signs, however, that Russians will take to the streets in protest or flock to the banner of a divided and feeble opposition.