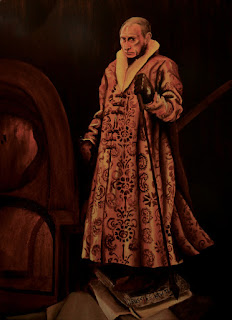 With oil prices plummeting and economic sanctions in place due to Russia unlawful annexation of the Crimea and unofficial invasion of Ukraine, Russia's economy is headed towards potential collapse and consumers are facing a possible return to a consumer market akin to that of the bad old days of the Communist era.  One of Putin's retaliation against European countries that have applied sanctions against Russia for its Nazi regime like behavior is to ban the import of various meats, cheeses, fruits and food stuffs form nations imposing and/or supporting sanctions against Russia.  Now, both the government and self-styled vigilantes are penalizing those who have continued to purchase and consume such foreign foods.  With all of the huge problems that face Russia, one would think that Putin would have larger worries to dwell upon.  Cynics - or perhaps they are realists - believe there is a method to Putin's madness: he is preparing the Russian public for the harsh austerity that is looming in the future in no small part due to Putin's own mismanagement. A piece in The Atlantic looks at Putin's outwardly insane behavior.  Here are highlights:

If it becomes law, the new classification will mean those caught importing banned fruits, vegetables, meat, and poultry can face up to seven years in prison. French cheese is apparently now just as dangerous to the security of the state as plutonium, uranium, assault weapons, and dirty bombs.

And speaking of cheese, the Interior Ministry this week released footage of a bust of what it called a “major cheese-smuggling ring.” Some 470 tons of forbidden cheese was found and six members of the alleged cheese mafia were arrested.

And why stop with food? The head of the Russian Association of Textile Manufacturers says contraband foreign clothing should also be destroyed. Russian authorities have also begun removing household products manufactured by Colgate-Palmolive, Procter & Gamble, and other leading Western companies from stores, claiming health risks.

It’s hard to wrap your head around all this craziness. At first glance, the Kremlin’s jihad against all things Western looks like the post-imperial temper tantrum of a regime that is truly losing the plot. And perhaps it is. Russia’s leaders want their empire back, dammit, and if they can’t have it they’re going to smash their dinner plate on the floor and trash their room.

“All the falling regimes share an interesting pattern. Before a fall they start acting crazy, they are struck by the epidemic of mass idiocy,” political analyst Valery Solovei wrote on Facebook.

Or perhaps there is a method to the madness. Perhaps Putin’s Kremlin is preparing society for what is coming in an era of low oil prices, a weak ruble, sanctions, and a long-term confrontation with the West. Consider it reverse shock therapy.

[T]he director of the Moscow-based Center for Post-Industrial Studies, wrote that the Russian economy was heading for an era of austerity and autarky, with thousands of private businesses going under and the state sector expanding.

“The real consequence will be Russia’s retreat from the global market and its economy’s transformation into one which is much more closed,” Inozemtsev wrote. “This way leads us towards a quasi-Soviet economy detached from the world and, at the same time, proud of its autarky; towards a deteriorating economy which compensates for the drop in living standards with pervasive propaganda.”

We should soon learn whether we are witnessing the death throes of the Putin regime or the birth of a new fortress Russia.

Putin's one misjudgment may be that he has forgotten that Russia's inferior standards of living compared to the West and the Communist police state led to the fall of the Communist regime.  Ironically, Putin is reinstating the exact situation that led to the downfall of the system he so reveres.  The tsars learned to their chagrin that calls for patriotism only go so far when standards of living are falling and oppressive government control is riding.  I know that Putin sees himself as Russia's new tsar, but does he really want to emulate the policies of Tsar Nicholas II (who had good intentions compared to Putin)?
Posted by Michael-in-Norfolk at Thursday, August 27, 2015