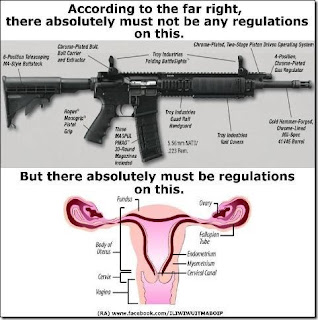 While the far right continues to have near orgasms over the fact that the obviously mentally disturbed Vester Lee Flanagan II was gay - Brietbart is calling the rainbow flag a "hate flag" - there has been a studious avoidance of the reality that the emerging facts that make it painfully clear that Flanagan should NEVER has been able to purchase a gun.  Yet Virginia's shameful gun laws made such a purchase all to easy.  Flanagan may have been the shooter, but the Virginia GOP also has blood on its hands.  A piece in the New York Times looks at the delusional Flanagan and the ticking time bomb that he represented.  What is frightening is that there are likely countless Vester Flanagans out there and in Virginia they can all easily buy guns to go on a shooting spree. Here are article highlights:

For two years after losing yet another television job, Vester Lee Flanagan II lived in a nondescript apartment across the street from WDBJ Channel 7, the station that had fired him. He worked in modest jobs at several insurance companies nearby. As thoughts of murder and revenge were swirling around his brain, he did his best to keep them out of sight.


But he was, in his own words, putting on “a smiley face to disguise what was to come.” Three separate suicide notes, typed within the last few weeks and sent to a news organization on Wednesday, document the homicidal rage that had apparently been building for years, culminating when Mr. Flanagan shot and killed a reporter and a cameraman for his former station before shooting himself in the head as the police closed in.
The fax, along with letters and photographs from his childhood, and interviews with people who have known him over the years, reveal someone who was consumed for much of his life with an encyclopedia of grievances. He was a black man who saw racism in every workplace; a gay man who felt demeaned, especially by other black men; a floundering son who addressed his accusatory suicide note to his successful father; an aspiring television newsman who, despite some talent, could not succeed at work or get along with his colleagues.

There were arguments and confrontations at work,  periodic eruptions, including a road rage episode captured on video and a sacrifice of his two pet cats, killings that Mr. Flanagan said he carried out because of anger at his firing. And then the final horrific explosion, broadcast live on television and posted on Facebook.

By the summer of 2012, managers at the station had begun to document problems in his employment file, accusing Mr. Flanagan of “misinterpreting” the actions and words of his co-workers. “Under no circumstances should you engage in harsh language, demonstrate aggressive body language, or lash out at a photographer in front of members of the public,” the station warned in one memo.

The station also ordered Mr. Flanagan to get employee-assistance counseling and warned: “It is your responsibility, going forward, to work at repairing these relationships, as the station cannot be put in the position of making assignments based on the inability of team members to get along.”

After he was fired from the Roanoke station in February 2013, Mr. Flanagan seethed again. He filed another harassment lawsuit, and served as his own lawyer. So angry one day after what he called “an awful chain of events,” he writes that he killed his two cats and drove to a forest, where he dug a grave and covered the bodies with leaves and a flower.

The anger occasionally spilled out. A video of a road rage incident this summer shows Mr. Flanagan apparently following another driver and confronting him after they get into an argument. The video, taken by the other driver, was posted online after Wednesday’s shootings.

Sadly, Virginia's gun laws fail to protect the public and help set the stage for tragedies like the one that occurred near Roanoke.
Posted by Michael-in-Norfolk at Friday, August 28, 2015