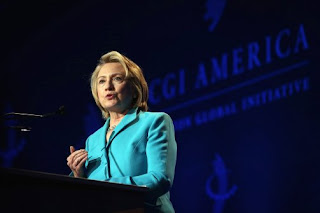 I will admit that I generally have a very low opinion of America's mainstream media, especially so called news outlets.  Reporters tend to be lazy and the sole emphasis is on sensation and grabbing headlines.  Real investigative reporting is increasingly rare and it's one reason why one finds the need to read British and other news outlets if one wants in depth  and/or investigative reporting.  Worse yet, time and time again the American media simply parrots what the GOP talking heads are spouting without challenging assertions that can easily be documented to be either untrue or deliberate lies.  A piece in Newsweek looks at the media's role in fanning "emailgate."  Here are highlights:

When it comes to the teapot tempest that is the Hillary Clinton email imbroglio, the real controversy isn’t about politics or regulations. It’s about journalism and the weak standards employed to manufacture the scandal du jour.

Because luminaries such as the public editor of The New York Times have dismissed critics of the emailgate coverage as rabid members on one side of a partisan divide—the pro-Hilary screamers versus the anti-Hillary frothers—I feel obligated to cut off that self-satisfied response up front: My opinion of Clinton is on par with my opinion of Jeb Bush. Neither is crazy, stupid or unelectable, which can’t be said about most other politicians stomping their way around Iowa these days. I’m not a Clinton supporter or opponent. I’m a Clinton agnostic.

Now let’s look at the real scandal—the one in journalism that’s been exposed by this whole episode.


There are two parts to emailgate: One, that Clinton used a personal email account when she served as Secretary of State, and the other, that neither she nor her aides preserved the emails. Break out the fainting couches and the smelling salts.

The first article about this episode (sorry, can’t even call it a scandal) appeared in The New York Times. . . . In what has to be one of the most snide journalistic defenses in a long time, Margaret Sullivan, the Times public editor, calls detractors of the piece as just Hilary supporters and dismisses most of the criticism by helpfully linking to the 2009 Federal Register, which lists an exceptionally technical series of regulations relating to the use and preservation of emails. She even cites a place to look, section 1236.22b. With all those numbers and letters, and the information coming out of a document as dull as the Federal Register, the story must be true, right?

In fact, the very rule that Sullivan cites contradicts the primary point of the Times story. For everyone except the two people who actually followed the link Sullivan posted, here is what the section actually says:

"Agencies that allow employees to send and receive official electronic mail messages using a system not operated by the agency must ensure that federal records sent or received on such systems are preserved in the appropriate agency recordkeeping system."

Catch the problem? The regulation itself, through its opening words, “specifically designates that employees of certain agencies are allowed to use non-federal email systems.” And one of those agencies just happened to be…drumroll please.… The State Department. In other words, not only was the use of a personal email account not a violation of the rules, it was specifically allowed by the rules.

Secretary of State Colin Powell did the same thing. And, just a tidbit—so did every other Secretary of State up until the current one, John Kerry. Why? Because the rules changed in 2014, after Clinton left office, and now it’s required to use a federal system. If Kerry used a personal account, he would be violating a regulation. Clinton did not.

[L]et’s get to part two of emailgate—that the agencies are required to make sure emails from non-federal accounts are preserved. Here is what the Times article says about that: Clinton "may have violated federal requirements that officials’ correspondence be retained as part of the agency’s record.


Let’s dismantle this one part at a time. There is a term in journalism for the word may. It’s called a weasel word, which helps readers gloss over what the story is really saying: That the Times doesn’t know if the regulations were violated, but it sure sounds good to suggest that it could have been.

Then there is the part about how “Clinton and her aides failed” to preserve the records. Well, guess what? Under the very same regulation that Sullivan cites, it is not the responsibility of the email senders, recipients or their aides to make sure that the records are preserved. It is the responsibility of the State Department itself, which does so through technical analysis of all of the systems being used.
Every email that Clinton sent to any federal email account was preserved, automatically. And what kind of preservation systems existed in the server for Clinton’s personal emails that didn’t go into a federal server? Were they copied into the DoD–5015.2 STD-certified product (a lot of techno-speak which means a particular record-keeper)? Was there an automatic relay out of the server into a preservation system? Hell, my email account has that.

The Times article makes it sound like Clinton just opened up a Gmail account and started sending emails without any consideration for the State Department techno-geeks responsible for following the rules and regulations,which, again, allowed for private email accounts to be used.

[A]s Clinton said on Tuesday, the server in question is the same one used by former President Bill Clinton and is located on private property, guarded by the Secret Service.

The rest of the stories Sullivan links to show things such as Democrats reacting to the Times story and that Clinton’s daughter Chelsea had an email account on the same domain name. (Which is a truly bizarre point, since every employee at the State Department—down to the lowliest person on the rung of authority—would be using the same domain name as Clinton if she was on the federal system.)

The end question: Was security compromised? Was the process she used inappropriate or create any dangers? Or was it potentially safer, with more protections than exist in the federal system? I don’t know. But what’s sad here is, neither do the reporters who are huffing and puffing about this folderol. And aren’t journalists supposed to know if there is a scandal before declaring that one exists?

Remember  one thing: if the New York Times and other major outlets had done real reporting and challenged Bush/Cheney assertions, the entire Iraq War debacle might have been avoided.  Despite this reality, we some of the same players making the same lazy ass mistakes that were made back then.  Before you write stories about scandals, make sure one actually exists.
Posted by Michael-in-Norfolk at Tuesday, August 25, 2015