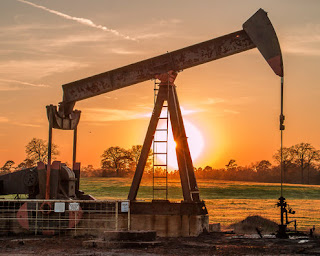 For years - actually decades - oil producing countries (think OPEC) have played a game of economic blackmail on non-oil producing nations, worked to keep oil prices high and enjoyed power and influence that under any other standard they did not deserve.  The side effect that they seemingly never thought through was that over time, such blackmail (i) made exploration and production feasible in places it had never existed, (ii) made secondary and tertiary recovery economically practicable, and (iii) made alternate fuels attractive and more competitive.  The end result has been more worldwide production and falling oil prices - and revenues that have often propped up failed regimes.  As a piece in the New York Times notes, the chickens could be about to come home to roost as falling prices are setting the stage for possible political unrest.  Here are article excerpts:

Oil, the lifeblood of many countries that produce and sell it, appears to be rapidly turning into an ever-cheaper economic curse.

A year ago, the international price per barrel of oil was about $103. By Monday, the price was about $42, roughly 6 percent lower than on Friday.

In oil-endowed Iraq, where an Islamic State insurgency and fractious sectarian politics are growing threats, a new source of instability erupted this month with violent protests over the government’s failure to provide reliable electricity and explain what has been done with all the promised petroleum money.

In Russia, a leading oil producer, consumers are now paying far more for imports, largely because of their currency’s plummeting value.

In Nigeria and Venezuela, which rely almost completely on oil exports, fears of unrest and economic instability are building.

In Ecuador, where oil revenue has fallen by nearly half since last year, tens of thousands of demonstrators pour into the streets every week, angered by the government’s economic policies.

Even in wealthy Saudi Arabia, where the ruling family spends oil money lavishly to preserve its legitimacy, the government has been burning through roughly $10 billion a month in foreign exchange holdings to help pay expenses, and it is borrowing in the financial markets for the first time since 2007. Other Arab countries in the Persian Gulf that are dependent on oil exports, including Kuwait, Oman and Bahrain, are facing fiscal deficits for the first time in two decades.

[N]ew anxieties about frailties in China, the world’s most voracious consumer of energy, have raised fears that the price of oil, now 30 percent lower than it was just a few months ago, could remain depressed far longer than even the most pessimistic projections, and do even deeper damage to oil exporters.

Although the price drop has most directly hurt oil exporters, it also may signal a new period of global economic fragility that could hurt all countries — an anxiety that already has been evident in the gyrating stock markets.

The price drop also has become an indirect element in the course of Syria’s civil war and other points of global tension. Countries that once could use their oil wealth as leverage, like Russia, Iran and Saudi Arabia, may no longer have as much influence, some political analysts said. Iran, which once asserted it could withstand the antinuclear embargo of its oil by the West, appeared to have rethought that calculation in reaching an agreement on its nuclear activities last month.

[W]hile lower oil prices stimulate economies of consuming countries, a protracted decline carries many unanticipated consequences — starting with the economic weakness in developing countries that buy increasing amounts of goods from the United States and others in the industrialized world.

A supply glut has been evident for some time, driven partly by a vast increase in Saudi production and a growing energy self-sufficiency in the United States, which was once heavily reliant on Middle East oil.

Saudi Arabia not only is producing a record amount, but also is increasing the number of rigs drilling for future production. And its Gulf allies, the United Arab Emirates and Kuwait, are following suit. . . . all the exporters in the Middle East are struggling with each other to protect Asian markets, now that the United States is using much less of their oil.

The global glut is likely to worsen if the nuclear deal with Iran is approved, potentially releasing as much as one million more barrels onto the 94-million-barrel-a-day global market in a year or so.  Iran’s oil minister, Bijan Namdar Zanganeh, has made no secret about his country’s intentions. “We will be raising our oil production at any cost, and we have no other alternative,” he was quoted Sunday in Iran’s state-run news media as saying.

The big change in recent years has been the surge of United States oil production, adding more than four million barrels a day to global supplies. But in recent months the oversupply has been driven primarily by the Saudis, who have flooded the market in what economists regard as a deliberate attempt to drive down the price so that other high-cost producers can no longer compete — most notably the Americans.

“The hemorrhaging of government budgets reliant on oil will force dramatic cuts in spending or dangerous increases in borrowing, if not both,” Mr. Goldwyn said. “The countries without significant foreign exchange reserves are most at risk, and they include Nigeria, Angola, Algeria, Venezuela and Iraq. The countries which need to sustain investment to maintain political legitimacy need to be worried, and that’s Brazil, Russia and even Iran.”

[A] longer-term worry about possible miscalculations by Saudi Arabia, on both the duration and magnitude of the oil price drop.

“With a burgeoning population looking for jobs, education and health care every day,” she said, “the expensive social contract between the royal family and Saudi citizens will get more difficult, and eventually impossible, to sustain if oil prices do not recover.”

Past greed, arrogance and shortsightedness may well upset the political apple cart in many countries, especially Saudi Arabia and Russia.
Posted by Michael-in-Norfolk at Tuesday, August 25, 2015