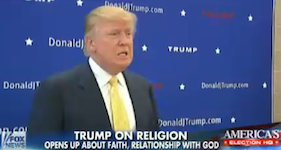 One of the hallmarks of conservative Christians in America today is their utter hypocrisy.  The claim that the Bible - which includes the New Testament Gospels - is the inerrant word of God, yet on almost every issue, they back policies that are diametrically opposed to the social gospel found in the New Testament Gospels.  They oppose health care for all, want to see government benefits for the poor and unfortunate slashed, they support a political party that seeks to create a new Gilded Age, they embrace racism, and now, they support a thrice married, loud mouthed bigot for the presidency.  And yet they wonder why the Millennials are fleeing religion in droves.  They should take a good look in the mirror.  A column in the New York Times  looks at  the "godly folk's" support for Donald Trump.  Here are excerpts:

Let me get this straight. If I want the admiration and blessings of the most flamboyant, judgmental Christians in America, I should marry three times, do a queasy-making amount of sexual boasting, verbally degrade women, talk trash about pretty much everyone else while I’m at it, encourage gamblers to hemorrhage their savings in casinos bearing my name and crow incessantly about how much money I’ve amassed?

Seems to work for Donald Trump.

Polls show him to be the preferred candidate among not just all Republican voters but also the party’s vocal evangelical subset.  He’s more beloved than Mike Huckabee, a former evangelical pastor, or Ted Cruz, an evangelical pastor’s son, or Scott Walker, who said during the recent Republican debate: “It’s only by the blood of Jesus Christ that I’ve been redeemed.”

The holy rollers are smiling upon the high roller. And they’re proving, yet again, how selective and incoherent the religiosity of many in the party’s God squad is.  Usually the disconnect involves stern moralizing, especially on matters sexual, by showily devout public figures who are then exposed as adulterers or (gasp!) closet homosexuals.

What’s different and fascinating about the Trump worship is that he doesn’t even try that hard for a righteous facade — for Potemkin piety. Sure, he speaks of enthusiastic churchgoing, and he’s careful to curse Planned Parenthood and to insist that matrimony be reserved for heterosexuals as demonstrably inept at it as he is.

But beyond that? He just about runs the table on the seven deadly sins. He personifies greed, embodies pride, radiates lust. Wrath is covered by his anti-immigrant, anti-“losers” rants, and if we interpret gluttony to include big buildings and not just Big Macs, he’s a glutton through and through.

I’m grasping at straws, because there’s no sense in the fact that many of the people who most frequently espouse the Christian spirit then proceed to vilify immigrants, demonize minorities and line up behind a candidate who’s a one-man master class in such misanthropy.

Posted by Michael-in-Norfolk at Wednesday, August 26, 2015