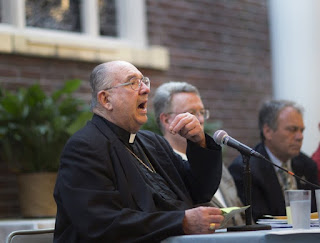 On issues of human sexuality the Roman Catholic Church continues to ignore modern knowledge and science, especially on issues of sexual orientation.  Rather than accept the fact that homosexuality is (i) a normal, naturally occurring condition for a portion of the world's population, and (ii) no more sinful than breathing, the Church continues to embrace 13th century batshitery first launched by individuals who modern experts would likely label as mentally disturbed.  Locally, one of the worse proponents of such backwardness is the Bishop of the Diocese of Richmond, Bishop Francis DiLorenzo, who is virulently anti-gay.  Similarly, he believes in the subjugation of women to men and bars divorced and remarried Catholics from positions  in the diocese's schools.  Yet this Neanderthal knuckle dragger is now exhorting local Catholics to accept the science of climate change.  As regular readers know, I am all for accepting and acting on scientific knowledge of climate change and regularly , but for DiLorenzo to suddenly embrace knowledge and science on every other issue, is the height of hypocrisy.  The Virginian Pilot looks at this hypocrisy on display:

Responding to Pope Francis' call this summer for prompt action to address climate change, Catholic Bishop Francis DiLorenzo told an audience of about 200 Tuesday night that people must learn about the science of what is happening to the world.

DiLorenzo's remarks came at the start of a symposium of theologians and climate experts, including retired naval officers, that was sparked by the lengthy papal encyclical in June that called for a worldwide effort to confront climate change.

The pontiff condemned the destruction of the environment for personal profit and short-term gain. Such a pronouncement from the pope in a formal letter to Catholics is considered an authoritative teaching.

The bishop said he believes the region's Catholics should begin with stronger education about environmental problems and issues in the church's elementary and high schools, as well as colleges and adult education.

Tackling environmental problems is in keeping with the Catholic beliefs that "every human being has the right to life, food, clothing, shelter, health care," he said.

The last part of the quoted language is perhaps the most hypocritical since DiLorenzo consistently opposes any and every gay friendly proposal in Virginia as well as women's rights.   He epitomizes the bitter old men in dresses that are steadily killing Catholicism in America.  Oh, and before he condemns gays, perhaps he should focus on his own sin of gluttony - the man obviously hasn't missed any meals given his large girth.
Posted by Michael-in-Norfolk at Wednesday, August 26, 2015