Will Trump Rebrand GOP As a White Nationalist Party? 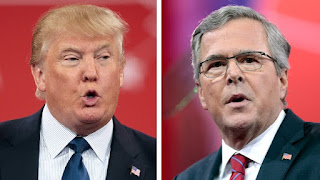 I swear that I try to find other things to write about other than the latest batshitery of GOP presidential candidate Donald Trump, but "The Donald" is making that effort difficult!  And even when Trump isn't spewing the batshitery himself, other GOP nominee want to be types are adding to the craziness: e.g., Jeb "Jebbie" Bush today when defending his "anchor baby" remark managed to insult Asian immigrants even as he sought to defuse his anti-Hispanic faux pas:

Bush said: "What I was talking about was the specific case of fraud being committed where there's organized efforts, and frankly, it's more related to Asian people coming into our country and having children in that organized effort."

These guys are truly the gang that can't shoot straight.  Talking Points Memo looks at what Trump is doing to the GOP:

Is Donald Trump a 'populist', the candidate of resentment and privilege or simply the final embodiment of the Crazy, the Crazy made flesh and coming amongst us, the Jesus who was foretold by Michele Bachmann's John the Baptist. One of the great injuries Trump has already done to America and our collective dignity is that we are now forced to take him seriously in terms of understanding what he represents in political terms since he's not going anywhere and only appears to be gaining strength.

Much of what has driven the GOP in the Obama era has been anxiety and resentment about losing out to rising forces in the American political-economy and culture - the decreasing white share of the national electorate (embodied by but also partly connected to Barack Obama's election), changing social and cultural mores (support for LGBT rights) driven by Americans under the age of 35, a renascent and assertive women's movement and the increasing defensiveness or even paranoia of organized wealth.

Trump brings all these together with better messaging and fewer apologies - which is the core of his political potency and why his electoral strength seems to cross many common ideological divisions. In Trump world there are winners and losers. And right now you're a loser.

Trump appears to be making a bid to rebrand the GOP as a white nationalist party, just with better marketing and better hair. Trump's response to that anti-immigrant hate crime in Boston remains very telling and has not received enough attention. Today we see a similar response from his campaign manager to people chanting 'white power' at his big speech in Alabama.

It's really not too much to say that the Trump campaign is leaving the door wide open to people who see his immigrant bashing American greatness campaign in deeply racial terms, indeed even to ones who are so "passionate" that their passion could spill over into violence.

Another look at this question of populism and grievance is this piece by Jeet Heer in the new New Republic. It's a good piece and I agree with most but not all of it. Jeet's argument is that far from being a populist Trump is the candidate of aggrieved and threatened privilege.
What I draw from this is that the politics of grievance and resentment can pull in and appeal to people who are ... well, genuinely and legitimately aggrieved. Indeed, at their best, that's what campaigns like Trump's do, feed off the grievances and anger of aggrieved elites but also appeal to people who are undeniably getting a bag shake from the system. At some level you have to do that since, by definition, there aren't enough elites to build a majority political movement around.

As you have consistently argued, this is not rebranding but making more explicit the white nationalist appeal of the Republican Party going back to Nixon's Southern strategy. Trump seems to me less misogynist than some of the other candidate clowns. And his "foreign policy" is not any farther from "reality-based" than W's or Reagan's IMO.