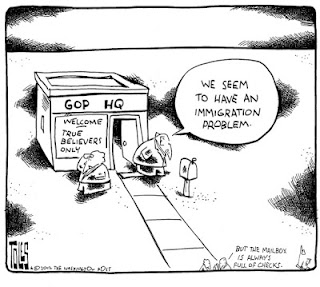 Racism is one of the pillars of today's Republican Party.  Other pillars include religious extremism that tends toward a Christian Dominionist agenda.  Another is greed and selfishness that argues for throwing the poor and less fortunate in the gutter.  Donald Trump is pandering to all of these ugly undercurrents, but his embrace of racism is what seems to be holding at the top of GOP polls.  In doing so, however, he may be reinforcing the Republican Party's transition to a wholly white party (give or take a few Uncle Tom's like Clarence Thomas).  A piece in Slate looks at this trend that over the long term may be the death of the GOP.  Here are excerpts:

Most of the time, when we talk about immigration, we’re talking about Latin America. Donald Trump isn’t threatening to round up Irish immigrants in Boston who entered the country illegally or to build a wall between us and Canada; he’s threatening Latinos and tapping into an ugly strain of racist nativism. It’s why “anchor baby”—slang for the American-born children of unauthorized immigrants—is such a charged term. To many, it’s racial code for often brown-skinned, Spanish-speaking children.

[R]hetoric aside, America’s immigrant community goes beyond Latino and Hispanic Americans. It includes Africans, Europeans, and Asians, one of the fastest growing groups in the country. Not all Asians are tied to the immigrant experience—more than a quarter are native-born, with long and durable ties to the United States. But the large majority are foreign-born, with roots in a variety of different countries, from China and Japan to Korea, Vietnam, India, and Bangladesh. Moreover, they’re a rising share of the electorate—in 1996, just 1.6 percent of voters were Asian. In 2012, it was 3.4 percent. As second- and third-generation Asian Americans take the stage in national life, that voting block will increase.

When Republicans attack immigration—and increasingly, immigrants—we know it alienates Hispanic and Latino voters. Indeed, between Trump and his chorus of imitators, the party has all but abandoned its outreach to that community. But in this analysis, we shouldn’t ignore Asian Americans. This rhetoric matters to them too, and if Republicans aren’t careful, they’re set to lose two groups and likely seal their fate for next November.

Obama scored an enormous win among Asians. His 73 percent share of the Asian vote was a significant increase from the previous election and a bright spot in his overall performance. It would have been one thing if, like blacks, Asians were Democratic stalwarts. But they weren’t.


In 2012, Asians were primed to follow the national trend and vote a little more Republican. But they didn’t. Just 26 percent voted for Mitt Romney, the lowest GOP total in 20 years. What happened? What turned a small Democratic edge into an outright advantage?


Again, the answer is immigration, and specifically, the sense of exclusion that came from the GOP. In the 2012 primary, like this one, Republicans were torn over immigration policy, with candidates having a strong incentive to oppose comprehensive reform. Throughout the primary process, candidates fought to surpass one another with draconian solutions for dealing with unauthorized immigrants . .

The simple intervention of making an Asian subject feel excluded with respect to ‘Americanness’ and being suspected of not being a U.S. citizen increased negative dispositions towards the Republican Party and increased positive views of the Democratic Party . . . Asian voters tied the Republican Party to racial discrimination.

Indeed, in its recent probe of party affiliation, Pew found an almost 3-to-1 divide among Asians: 65 percent identified with the Democratic Party, 23 percent with the GOP.

Democrats are watching the Republican primary. They are recording and polling and testing. Come next year, they will blanket immigrant communities with the greatest hits of Republican rhetoric, and over the course of the campaign, countless people—teachers, factory workers, small business people, and others—will remember the comments about “illegals” and “anchor babies.” And they’ll act accordingly.

On Friday, a writer for the Federalist—a conservative website—asked if the GOP was the “party of freedom” or the “party of white identity.” If the party keeps moving on its present path, there will be no answer but the latter.