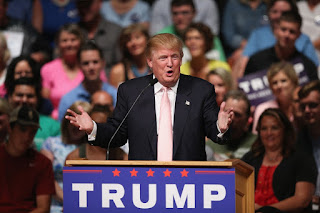 As noted before on this blog, historically the Richmond Times-Dispatch has been one of Virginia's most conservative newspapers and it has all too often been either a supporter of or apologist for Republican Party lunacy.  And like the GOP establishment, the paper seem to revel in the short term benefits of empowering Christofascists and low life types of the GOP base for short term political expediency.  Now, belatedly, the Times-Dispatch seems to recognize the Frankenstein monster that was created and now embodied in Donald Trump's insane candidacy.  Here are highlights from an editorial condemning Trump's immigration lunacy that is being embraced by far too many in the ignorance worship Republican Party base:

Apparently goaded by complaints far and wide that his campaign was long on bloviation and short on specifics, Donald Trump finally unrolled a policy proposal. Be careful what you wish for.
The Donald’s plan to address immigration reads like something a seventh-grader might have come up with. It contains the inevitable proposal to build a giant wall along the Mexican border, because “a nation without borders is not a nation.”

Trump says he would make Mexico pay for the wall. If it doesn’t, he will “impound remittances” — money sent back to the home country — made with illegal immigrants’ wages. How is he going to do that, exactly?

He would have to trace all international monetary transfers back to their originating point, and then try to figure out if the sender is legally present in the U.S. That takes considerable time. Legal immigrants also send remittances. Ergo, Trump wants to impound all remittances — and then, after sufficient research, release some of them. Good luck getting the courts to approve such guilty-until-proven-innocent logic.

But for Trump, that’s just an appetizer. He also wants to triple the size of ICE, amend the Constitution to prevent birthright citizenship, and impose a nationwide E-Verify system so no business can hire anybody until the government agrees.   This is the favorite in a party that claims to want smaller government?

Trump’s proposals have so little connection to facts or logic that they are laughable. But then, facts and logic are irrelevant; his fans are not interested in them, and to bring them up simply proves, to Trumpmaniacs, that you are part of The Enemy.

Trump is the candidate of the primal scream. Like a primal scream, his campaign has no coherent message, no organizing principle, no concrete agenda. It is an emotional volcano, a geyser of raw id. Like a volcano, it is a phenomenon to behold. But if it isn’t capped soon, both the GOP and the nation could end up badly burned.