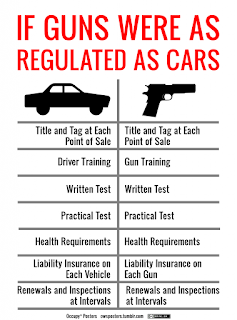 While much of the far right is obsessing over the race - and sexual orientation - of the shooter in the shocking on air murder of two TV journalists outside of Roanoke, Virginia yesterday, sane people are once again citing the problem that made the murders far more likely: America's insane gun laws that continue to make America like something out of the Old West and an international embarrassment.  The far right loves to bloviate about "American exceptionalism." When it comes to our gun control laws, America is exceptional: exceptionally stupid. A column in the New York Times looks at the ridiculousness of the current gun control laws and things that could be readily done to drastically reduce gun carnage if politicians would grow a spine and stand up to gun manufacturers and the lunatics of the GOP base.  Here are highlights:

The slaying of two journalists Wednesday as they broadcast live to a television audience in Virginia is still seared on our screens and our minds, but it’s a moment not only to mourn but also to learn lessons.

The horror isn’t just one macabre double-murder, but the unrelenting toll of gun violence that claims one life every 16 minutes on average in the United States. Three quick data points:

■ More Americans die in gun homicides and suicides every six months than have died in the last 25 years in every terrorist attack and the wars in Afghanistan and Iraq combined.
■ More Americans have died from guns in the United States since 1968 than on battlefields of all the wars in American history.
■ American children are 14 times as likely to die from guns as children in other developed countries, according to David Hemenway, a Harvard professor and author of an excellent book on firearm safety.

Bryce Williams, as the Virginia killer was known to viewers when he worked as a broadcaster, apparently obtained the gun used to murder his former co-workers Alison Parker and Adam Ward in response to the June massacre in a South Carolina church — an example of how gun violence begets gun violence.

Whether or not Williams was insane, our policies on guns are demented — not least in that we don’t even have universal background checks to keep weapons out of the hands of people waiting to go boom.

The lesson from the ongoing carnage is not that we need a modern prohibition (that would raise constitutional issues and be impossible politically), but that we should address gun deaths as a public health crisis. To protect the public, we regulate toys and mutual funds, ladders and swimming pools. Shouldn’t we regulate guns as seriously as we regulate toys?

Gun proponents often say things to me like: What about cars? They kill, too, but we don’t try to ban them!

Cars are actually the best example of the public health approach that we should apply to guns. Over the decades, we have systematically taken steps to make cars safer: We adopted seatbelts and airbags, limited licenses for teenage drivers, cracked down on drunken driving and established roundabouts and better crosswalks, auto safety inspections and rules about texting while driving.

This approach has been stunningly successful. By my calculations, if we had the same auto fatality rate as in 1921, we would have 715,000 Americans dying annually from cars. We have reduced the fatality rate by more than 95 percent.

Yet in the case of firearms, the gun lobby (enabled by craven politicians) has for years tried to block even research on how to reduce gun deaths. The gun industry made a childproof gun back in the 19th century but today has ferociously resisted “smart guns.” If someone steals an iPhone, it requires a PIN; guns don’t.

The United States is an outlier, both in our lack of serious policies toward guns and in our mortality rates. Professor Hemenway calculates that the U.S. firearm homicide rate is seven times that of the next country in the rich world on the list, Canada, and 600 times higher than that of South Korea.

We need universal background checks with more rigorous screening, limits on gun purchases to one a month to reduce trafficking, safe storage requirements, serial number markings that are more difficult to obliterate, waiting periods to buy a handgun — and more research on what steps would actually save lives.

Australia is a model. In 1996, after a mass shooting there, the country united behind tougher firearm restrictions. The Journal of Public Health Policy notes that the firearm suicide rate dropped by half in Australia over the next seven years, and the firearm homicide rate was almost halved.

Here in America, we can similarly move from passive horror to take steps to reduce the 92 lives claimed by gun violence in the United States daily. Surely we can regulate guns as seriously as we do cars, ladders and swimming pools.

Posted by Michael-in-Norfolk at Thursday, August 27, 2015