Will Obama's "Loner" Instict Be His Undoing? 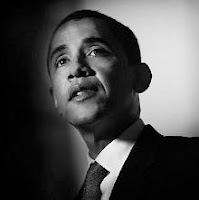 Since taking office, Barack Obama has managed to disappoint and alienate many of the segments of the Democrat party base that helped put him in office. He' given a lot of pretty talk but has shown little desire to act as a leader and he has time and time again failed to stand up to GOP extremism and lunacy, instead believing that somehow sanity and "good policy" would win over the insane and the demagogues. Now, with the 2012 election thirteen months away, the issues are (1) can Obama reconnect with the base he has alienated and (2) can he convince moderates and independents to give him a second chance to deliver what he promised but threw aside during his first term. A column in the Washington Post looks at the situation and speculates whether or not Obama can reconnect with people. Personally, I am not holding my breath. Here are some column highlights:

Beyond the economy, the wars and the polls, President Obama has a problem: people. This president endures with little joy the small talk and back-slapping of retail politics, rarely spends more than a few minutes on a rope line, refuses to coddle even his biggest donors. His relationship with Democrats on Capitol Hill is frosty, to be generous. Personal lobbying on behalf of legislation? He prefers to leave that to Vice President Biden, an old-school political charmer.

Obama’s circle of close advisers is as small as the cluster of personal friends that predates his presidency. There is no entourage, no Friends of Barack to explain or defend a politician who has confounded many supporters with his cool personality and penchant for compromise. Obama is, in short, a political loner who prefers policy over the people who make politics in this country work.

Obama’s isolation is increasingly relevant as the 2012 campaign takes shape, because it is pushing him toward a reelection strategy that embraces the narrow-cast politics he once rejected as beneath him. Now he is focused on securing the support of traditional Democratic allies — minorities, gays, young people, seniors, Jews — rather than on making new friends, which was the revolutionary approach he took in 2008, when millions of first-time voters cast their ballots for his promise of change.

Obama’s policy-first approach diminished the importance of people — people on Capitol Hill and along K Street, let alone throughout the country — in pushing through his program and providing the White House with valuable intelligence. Whether it was a matter of giving the American public too much credit or not enough remains an open question for many inside the administration.

The president’s supreme confidence in his intellectual abilities and faith in the power of good public policy left the political advisers and policymakers in his White House estranged. The initiatives that have emerged have often been unpopular and unsatisfying — too small, too big, too beside the point — to a country consumed by economic uncertainty.

And within the White House, a divide grew between those who helped engineer the president’s victory and those who joined the administration during the transition. The newcomers thought policy was being developed in a political vacuum, and they watched many of the administration’s proposals have a difficult time moving forward, even in a House and a Senate with large Democratic majorities.

“He’s not a guy that leans on others too much,” David Axelrod, his senior adviser at the time, told me in January 2010. “He processes things in his own mind.” In that cerebral isolation, Obama used his first year in office to chase history rather than focus on the most immediate problem of the day — an economy shedding hundreds of thousands of jobs a month.

The president never spends more than 15 minutes working a rope line, his advisers say, and donors complain about a White House that keeps Obama away from the necessary push and pull of America’s capitalist democracy. . . . Where Clinton worked a room until he met everyone, Obama prefers to shake a few hands, offer brief remarks and head home to spend the night in the residence, so he can have breakfast with his girls the next morning and send them off to school. That may be good for his mental health, but it’s a challenge for those in the reelection campaign assigned to manage the whims of big donors. . . . many Democrats are surprised that the former community organizer from Chicago’s South Side is not a bit angrier in public, a bit more connected to people’s troubles during tough economic times.


With just over a year before Election Day 2012, advisers say that Obama recognizes his people problem and is working to address it. Beyond the Saturday reconnect sessions, his stump speeches advocating for his jobs plan are becoming more populist and partisan. He is outside the Beltway more, reaching out to voters. His supporters, though still worried, are starting to like what they see. But inside the Beltway, the legacy of his relationship, or lack thereof, with Democrats on the Hill remains a problem for his jobs plan — and, by extension, his political future.

Posted by Michael-in-Norfolk at Saturday, October 08, 2011

I don't know a lot about Governor Chris Christie other than he is supposedly a moderate Republican, but I admire him for one thing. He carefully considered the calls for him to enter the 2012 Presidential Race and then said, "No, I just don't have the experience to do that at this point in my career."

How much better off would the United States of America be right now had Barack Obama had the sense and the self discipline to come to the same decision in 2008? He certain was not and is not yet experienced enough in any way to be President.

Had he not gotten into a race he had no business being in, either Hillary Clinton or John McCain would now be President of the United States. There is no way we could be any worse off than we are now, no matter which one it might have been.

I'm a Republican moderate and even I suspect that the country would have been much better off with Hillary Clinton than it is with Obama at the helm!

I agree with you about Hillary. I suspect we would have seen my more leadership with Hillary in the White House. I did worry about Bill being a loose canon, but in retrospect, Obama appears to have been a bad choice.

However, with Sarah Palin on the ticket with him, a McCain presidency would be fraught with danger. The idea of Palin as president if something happened to McCain sealed the deal as to why I could not support McCain. My late mother cited Palin's nomination as VP as the kiss of death.

2008 may have offered two bad choices but with Palin on the GOP ticket, Obama was the lesser of the evils. Palin is a freaking lunatic who refuses to recognize her own huge inadequacies.