A Marine Continues to Fight to Defend the Constitution 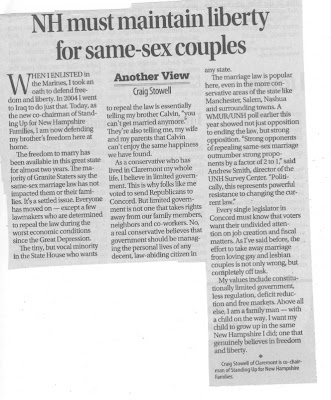 While the Christianists love to wrap themselves in religion and the American flag, in truth their true goal is to subvert the United States Constitution for which the nation's flag is but an emblem. The Christianist goal - as frequently voiced by Bryan Fisher and other Christianist hate group talking heads - is nothing less than to either over throw the U.S. Constitution completely and impose a Christianist theocracy or at a minimum strip constitutional protections from all but the Christianists and their like minded religious extremists. Despite these Christianist goals, elected officials sworn to uphold the Constitution (and those like Mitt Romney seeking elected office) grovel before and prostitute themselves to those who in reality are traitors to the nation - my local member of Congress, Scott Rigell is, in my opinion, one such prostitute/traitor.
For me, it is sickening to watch. But not all of those who have sworn to defend and uphold the U.S. Constitution are willing to throw their sworn oaths on the dung heap and pander to the Christianist agenda. One such individual is Craig Stowell, a former Marine, who wrote and op-ed to the New Hampshire Union Leader opposing GOP/Christianist efforts to repeal New Hampshire's same sex marriage law. An image of Stowell's article is set out above (click on it to enlarge it). He definitely gets it right when he says no real conservative believes in managing the personal lives of law abiding citizens. No, it is only false conservatives and religious extremists who want to police the bedrooms of tax paying citizens and inflict their own seriously mentally disturbed beliefs on all citizens.

Byran Fischer rants about Mormons and Muslims not being allowed to hold public office or enjoy constitutional rights. Fischer has it backwards. If anyone should face such limitations - and I don't advocate this - its the Christianists and those who put personal religious beliefs above the U.S. Constitution and the equal rights of other citizens.
Posted by Michael-in-Norfolk at Thursday, October 06, 2011