Conservative "Christians" - You Will Know Them By Their Hate 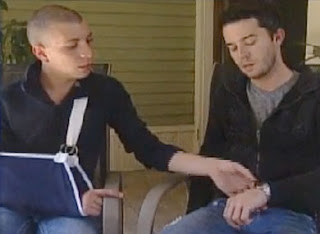 As the myths go, in the early days of the Christian Church while everyday Christians were persecuted - often viciously - supposedly the Christians stood out because of their love for others. We've now gone 180 degrees and I would argue that many Christians - especially conservative and evangelical Christians are best known for their hatred towards others rather than love. And the targets of their hate are many: minorities, immigrants, non-Christians, foreigners, etc. But gays continue to win a special type of hatred that often seems to welcome anti-gay violence despite disingenuous lip service to the contrary. Worse yet, parents who mindlessly follow Bible thumping pastors (and priests) continue to disown their own children with the result that LGBT teens represent a disproportionate percentage of homeless youth. Now, one Christianist pastor has taken the anti-gay bigotry and hatred to a new level: he physically and verbally assaulted two young gays (pictured at right) who sought to enter the pastor's church. One of the assault victims was the pastor's own son. I'm sorry, but the individual who merited the beating was the pastor, not the young gay couple. As a parent myself, I can only see the pastor as a foul monster. Here are highlights from The New Civil Rights Movement:

A gay Tennessee couple was reportedly attacked — physically and verbally assaulted — by a Christian Pastor and his deacons to prevent the same-​sex couple from entering the Pastor’s church. Sadly, the pastor is the father of one of the two members of the gay couple. Also sadly, the church members and bystanders did not lift a finger to help the couple or to stop church leaders from perpetrating the crime. Further, initially, local authorities refused to allow the couple to file charges.

Pittman said the attacked was prompted by the pastor of the church, Jerry Pittman, his father. “My uncle and two other deacons came over to the car per my dad’s request. My uncle smash me in the door as the other deacon knocked my boyfriend back so he couldn’t help me, punching him in his face and his chest. The other deacon came and hit me through my car window in my back,” said Pittman. He said bystanders did not offer assistance. He said the deacon yelled derogatory homosexual slurs, even after officers arrived. He said the officers never intervened to stop the deacons from yelling the slurs.

Offensively, the ABC affiliate news report allows the sheriff on camera to even suggest that the couple might have deserved the violence they encountered, without challenge, and offers an impending divorce of the Pastor as a reason for his hostile actions. Great act of “journalism.”

I hate to say it, but each time I hear about stories such as this one, I find it increasingly difficult to set foot in any supposedly Christian church. It's little wonder that the number of atheists and agnostics is growing faster than any other religious category. If pastor Pittman represents the face of Christianity, let's hope it dies a rapid death.
Posted by Michael-in-Norfolk at Monday, October 03, 2011