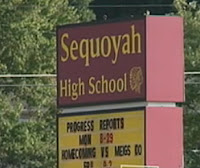 There must be something toxic in the water in Tennessee. First we saw a Tennessee church pastor physically beating his gay son and his boyfriend with the help of church deacons. Now this report of a Tennessee high school principal physically assaulting a 17 year old student for wearing a pro-GSA T-shirt. Yep, you can really tell the Christians by their lack of love and open hatred. Proving again that conservative Christianity is a malevolent force in the world. The ACLU has now become involved and has issued a demand letter (a copy can be viewed here) that the school cease barring the rights of students to freedom of speech and granting the same treatment for a Gay Straight Alliance as is afforded to other student organizations. Obviously, I hope the student takes out assault charges against the principal who clearly needs to be fired. Here is more information via the ACLU's website:

MADISONVILLE, Tenn. – A 17-year-old senior at Sequoyah High School was reportedly shoved, bumped in the chest and verbally harassed by his principal last week for wearing a T-shirt in support of efforts to establish a gay-straight alliance (GSA) club on campus. In response, the American Civil Liberties Union and the ACLU of Tennessee sent a letter to the school district today demanding that students’ rights to free speech be protected in the classroom.

The ACLU has been assisting the student, Chris Sigler, in his and other students’ efforts to overcome resistance from school officials to establish a GSA. Principal Maurice Moser had previously threatened to punish students who circulated petitions about the club.

Sigler wore a homemade T-shirt to school last Tuesday that said “GSA: We’ve Got Your Back.” A teacher ordered Sigler to cover up the shirt in the future. Sigler, knowing he had a right to wear the shirt, wore it again Friday, and resisted an order to remove the shirt. Sigler says that Moser then ordered all students out of the classroom, except for Sigler’s sister Jessica, who refused to leave. According to both students, Moser then grabbed Sigler’s arm, shoved him, and chest-bumped him repeatedly while asking “Who’s the big man now?” Sigler’s mother reported that when she arrived at the school, she saw her son seated in a desk with Moser leaning over him and shouting in Sigler’s face. The Siglers filed a report about the incident that afternoon with the Monroe County Sheriff’s Department.

“All students deserve a safe and respectful learning environment. Harassment, abuse or censorship of any student – regardless of sexual orientation – is absolutely reprehensible as well as illegal,” said Amanda Goad, staff attorney with the ACLU Lesbian Gay Bisexual and Transgender Project. “We expect the police to investigate this quickly and fairly, and take statements from all witnesses who were present.”

The Advocate also has coverage here. Once again we see self-congratulatory Christians - using the term very loosely - seeking to trample upon the rights of others. It is the Christianists , not LGBT citizens, who continually demand special rights at the expense of the rest of the citizenry.
Posted by Michael-in-Norfolk at Tuesday, October 04, 2011