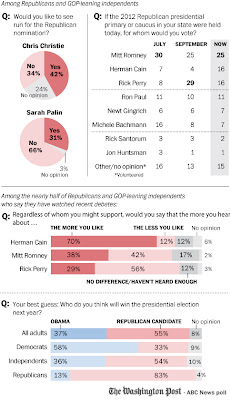 Sometimes familiarity can breed contempt - or at least dislike and a loss of "star power." So far, it seems that the more folks learn about Rick Perry, the less they like the man (the same also seems to hold true for Sarah Palin). Or at least so a new Washington Post-ABC News poll suggests and the chart above illustrates. The Washington Post notes in part as follows:

Rick Perry’s star in the race for the GOP presidential nomination has faded, as most of those tuning in to recent debates say the more they hear about the Texas governor, the less they like him. By contrast, Herman Cain appears to have benefited, moving into the top tier. There’s only modest public demand for New Jersey Gov. Chris Christie to enter the race, even as he runs competitively against President Obama.

Posted by Michael-in-Norfolk at Tuesday, October 04, 2011