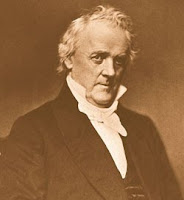 As a lover of history, it's disturbing to see how the far right wants to re-write history to support their nefarious religious agenda. In contrast, it's also encouraging to see when censored histories are unwound and the truth begins to surface - even if not in widely publicized circles. A case in point: new historical research that is raising the question of whether or not America hasn't already had a gay president. And no, I'm not talking about Abraham Lincoln who seemed to have had some interesting same sex relationships. Instead, I am talking about Lincoln's predecessor in office, James Buchanan, 15th president of the United States. Historian James W. Loewen, author of “Lies Across America,” which examines how historical sites inaccurately portray figures and events in America’s past, has researched Buchanan who was a "confirmed bachelor" all his life. Here are highlights from an article on Matt Comer's Q Notes:

“I’m sure that Buchanan was gay,” Loewen said. “There is clear evidence that he was gay. And, since I haven’t seen any evidence that he was heterosexual, I don’t believe he was bisexual.” According to Loewen, Buchanan shared a residence with William Rufus King, a Democratic senator from Alabama, for several years in Washington, D.C.

Loewen said contemporary records indicate the two men were inseparable and wags would refer to them as “the Siamese twins.” Loewen also said Buchanan was “fairly open” about his relationship with King, causing some colleagues to view the men as a couple. For example, Aaron Brown, a prominent Democrat, writing to Mrs. James K. Polk, referred to King as Buchanan’s “better half,” “his wife” and “Aunt Fancy … rigged out in her best clothes.”

Loewen said their relationship — though interrupted due to foreign-service obligations — ended only with King’s death in 1853. In the late 1890s, Loewen visited Wheatland, the mansion in Lancaster, Pa., where Buchanan spent his later years. Loewen said he asked a staffer at Wheatland if Buchanan was gay and the reply was: “He most definitely was not.”

Patrick Clarke, the director of Wheatland, said the staff now takes a neutral stance on Buchanan’s sexual or affectional preference. “There’s no solid proof that Buchanan was heterosexual, nor is there solid proof that he was homosexual,” Clarke said. “If we ever come up with a smoking gun that proves it one way or the other, I would definitely encourage our staff to share it with the public.”

Loewen said many historians rate Buchanan as one of the worst U.S. presidents. Buchanan was part of the pro-slavery wing of the Democratic Party, and corruption plagued his administration. But, Loewen said those flaws shouldn’t discourage members of the LGBT community from acknowledging Buchanan’s status as a gay man.

“Lots of gay people have been exemplary,” he said. “Let’s look at Walt Whitman. For my money, he’s the best poet in the history of the country. But, we also have to acknowledge the failures. If we only admit that really great people are gay, what kind of history is that? And, how is that believable? It’s ridiculous. We have to tell it like it was.”

Hopefully, someday there will not be a conscious effort to hide the true sexual orientation of figures from history. No doubt the Christianists will scream and protest, but we do really need to know the truth.
Posted by Michael-in-Norfolk at Sunday, October 02, 2011