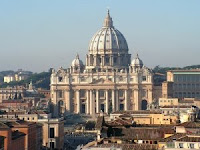 I have previously looked at the fact that the fastest growing religious segment in the United States is the "non-religious" category as individuals leave institutional religion altogether. I view the trend as the result of the constantly toxic and hate filled face of Christianity provided by the Christian Right - who are neither Christian or right - and the fact that science and knowledge is making it increasingly difficult to believe in the Bible as "the inerrant word of God." Instead, it is all too easy to see the Bible as a man made work that has gone through all kinds of revisions and editing to reinforce the views of "the winners" in the early church and political machinations over the centuries. To make up for membership losses in educated and advanced countries, the professional Christians and denominations like the Roman Catholic Church have looked to growth in the developing world to maintain over all membership, with Latin America and Africa being two such bastions. Now, however, that strategy seems to be crumbling for the Catholic Church in South America as Brazil appears headed on the same trend as in the USA. Some years back I read one of Bishop John Shelby Spong's books that made the case of why Christianity must change or die. Given the refusal of many denomination leaders such as Benedict XVI, the Nazi pope, to permit change, it looks like death rather than change is the long term future of Christianity. The Virginian Pilot has a story that looks at the trend in Brazil and here are some highlights:

Bruno Maragato went through the Roman Catholic Church's rites like so many others before him in this most Catholic of nations: baptism, first communion, confirmation. But his next step was not part of the Vatican plan and, in fact, feeds a worrying trend for Catholics leaders. At age 16, Maragato left Christianity altogether.

A new study by Brazil's top research institute finds Magarato's views represent a sea change among a younger generation of Brazilians and present a fresh challenge for church leaders already struggling to hold on to parishioners across Latin America.

Brazil's Getulio Vargas Foundation finds, the country's Catholics are still leaving the church and at a higher rate than ever, but many younger parishioners, like Maragato, are simply becoming nonreligious.

Experts say this new twist poses a more potent threat to Catholic leaders than earlier losses. Now, the church isn't just competing against the Pentecostals, but courting people who have decided organized religion has no part in their lives.

"It's the most important phenomenon in this study, the abandonment of religion and the Catholics," said Fernando Altemeyer, a theologian at the Catholic University of Sao Paulo. "A considerable part of the Brazilian youth today are agnostic."

What raises the stakes for the Vatican is that church leaders have been viewing Brazil and other Latin American nations as bulwarks against losses in Europe and the U.S., where sex abuse scandals have inspired many to leave the church. About half of the world's Catholics reside in Latin America.

The number of people under the age of 20 in Brazil who say they follow no religion is growing three times more quickly than those 50 and older, with 9 percent of young Brazilians saying they belong to no religion, according to the study. That mirrors a similar trend in the number of people leaving the Catholic Church. The study, based on 200,000 interviews conducted for Brazil's 2010 census, shows the Catholic share of the population hit its lowest level since census figures tracked religion beginning in 1872.

Experts say the changes have accelerated as many women turn away from the Vatican's prohibitive views on contraception and abortion, which remains illegal in nearly all cases in Brazil. "The Catholic Church is literally losing its future, and the loss of women and young people is the most important driver of the fall," Neri said. . . . Mexico is poised to take Brazil's place as the world's top Catholic nation, although the church is also losing members there.

Personally, I hope the trend continues - or even accelerates. Only massive losses of membership (and the money that goes with that) will force the Vatican to leave its 13th century mindset and move towards the 21st century. Obviously, this shift will not happen on Benedict XVI's watch. If anything, his leadership and that of the ultra-right sycophants that he has appointed to bishoprics will hasten the flight of church members.
Posted by Michael-in-Norfolk at Saturday, October 08, 2011