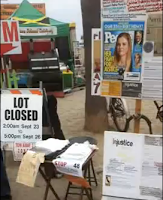 Once again opponents of gay equality who wrap themselves in the mantle of religion demonstrate that one of their most consistent traits - other than hating almost everyone, of course - is their inability to tell the truth. If their lips are moving, the safest assumption is that they are lying, deeming themselves exempt from the Commandment against baring false witness and lying. Apparently, lying and dishonesty are "family values" in their warped alternate universe. This time the lies arise out of the effort by Christianists to gather enough petition signatures to put the repeal of California's Fair Education Act on the ballot. Running out of time and still shy of the required number of signatures, these "godly Christians" have resorted to lying and duping the uninformed into signing their hate motivated petition. Such conduct is a criminal violation under California Elections Code, Section 18600. A formal complaint has been filed against the Stop SB 48 campaign. Prop8TrialTracker has details. Here are some excerpts:

Courage Campaign filed a formal complaint with the California Attorney General, District Attorney, and the Oceanside City Attorney on behalf of Max Disposti, who witnessed the events, requesting an investigation (and possible prosecution) into signature-gathering tactics used by Stop SB 48 volunteers. Alleging that SB 48 could expose children to sexual predators is simply unacceptable, and Stop SB 48 campaign and their volunteers should be held accountable.

A few days ago at a fair in Oceanside, my husband and I were asked if we wanted to sign a petition to protect children from abduction. When I asked what she meant, she said there was a law that just passed called SB 48 (the FAIR Education Act) that is forcing children to learn about “homosexuality” and sex without parental control, exposing them to sexual predators. As you can see in the photo on the right, she had plenty of supplemental materials to make her case. And, you guessed it: she turned out to be a volunteer with the Stop SB 48 campaign.

I stood next to this woman for the next three hours and talked to every single person who approached, drawn in by her giant posters. Every single one of them was disgusted by her actions and refused to sign her petition when I told them the truth about SB 48. Every single one. With only 14 days left until the Stop SB 48 campaign has to turn in their signatures, everything we do right now matters.

These people are truly heinous and a blight on society and the nation. They need to be prosecuted and on a larger scale driven back into the political wilderness. Meanwhile, as long as they continue to lie about us, I will continue to write and tell the truth about them.
Posted by Michael-in-Norfolk at Tuesday, October 04, 2011