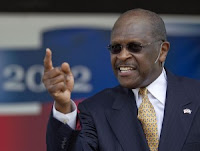 I watched an interview of would be GOP presidential candidate Herman Cain on MSNBC and was struck by several things, not the least of which was his resolute insistence that being gay is a "choice." When challenged, Cain retreated to stating that his views on LGBT individuals was a "difference of opinion." Never mind that virtually EVERY legitimate mental health and medical association (i.e., all but Christianist funded faux expert groups) disagree with Cain's ignorant and bigoted position on the issue. Applying Cain's lame "difference of opinion" excuse, I guess white supremacists who see blacks as subhuman have a a free pass to continue to embrace bigotry. Why not even allow anti-black bigots to discriminate in employment decisions. There really is no difference if "difference of opinion" makes bigotry and discrimination under the law and in society all acceptable and unassailable. And this from a man who wants to parade around pretending to be intelligent. Think Progress has a summary of Cain's other bigoted and ridiculous views which explains why he's the current darling of the mentally unbalanced and bigots of the Christianist/Tea Party crowd. Here are a few highlights:

(1) PLEDGED THAT HE “WILL NOT” APPOINT MUSLIMS IN HIS ADMINISTRATION: In an interview with ThinkProgress earlier this year, Herman Cain declared that he “will not” appoint a Muslim in his administration if he were elected president. In the months that followed, Cain qualified his position a number of times – at one point even telling Glenn Beck that he would appoint Muslims but only on the condition that they take a special loyalty oath – before finally recanting this unconstitutional stance and issuing an apology to Muslim-Americans. Unfortunately, since that time Cain has continued to peddle the ridiculous notion that Sharia law is a threat to the American legal system.

(6) WANTS TO PUT DIRTY ENERGY CEOS IN CHARGE OF EPA REGULATIONS: After an Iowa voter asked about increasing domestic oil production, Cain proposed creating a commission consisting of businessmen from the coal, oil, shale oil, and natural gas industries to gut environmental protections. Cain even said he would appoint the CEO of Shell, claiming the company had been “abused” by the EPA. Cain has close ties to several top oil executives.

(10) BELIEVES THAT AMERICANS HAVE THE RIGHT TO BAN MOSQUES: During a Fox News Sunday interview, Cain professed his belief that if a community wants to ban a mosque, “they have a right to do that.” Rather than idle banter, Cain’s comments came fresh off his speech blasting the proposed expansion of an existing Islamic center in Murfreesboro, Tennessee because it was, in the former pizza executive’s estimation, “not an innocent mosque.” Cain’s view is squarely at odds with not only the Constitution, but basic precepts of tolerance and diversity as well.

Clearly, Cain wants special rights for Christianists and Christian extremists while wiping out religious freedom for everyone else. He also shows contempt for the working poor and the environment.
Posted by Michael-in-Norfolk at Friday, October 07, 2011